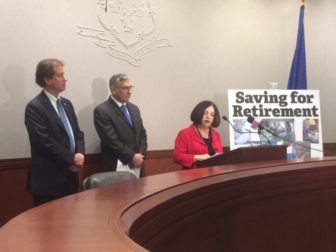 The investment industry and Senate Republicans lined up Tuesday against a Democratic proposal to create a state-sponsored retirement savings program for the 600,000 private-sector workers in Connecticut who have no access to a payroll savings plan.

After nearly two years of study, Comptroller Kevin Lembo and other Democratic legislative leaders say it is time for Connecticut to join California in offering employees of small businesses what could be a low-cost savings plan.

“When you’ve got 40 percent of working men and women in Connecticut without access to a workplace-hosted retirement savings plan, that’s a huge problem, not just for them, not just for their families, but for state and federal government,” Lembo said.

But Senate Republicans said state government has no place going into the business of offering a retirement savings program to private-sector workers who can invest in individual retirement accounts even if no payroll savings plan is available.

“Sometimes you just have to smack yourself on the forehead in this building and say, ‘What in God’s name is the state of Connecticut doing in this business or that business?” said Scott Frantz of Greenwich, one of three GOP senators to speak out against the idea.

Boucher said the state should be boosting the private sector, not competing with it.

“Retirement planning is one area in which there are an abundance of top-notch providers, yet Democrats are proposing the state run a single, mandated plan for private-sector workers,” Boucher said.

The Democratic plan would require employers to offer a payroll savings plan, either through a private company or a new Connecticut Retirement Security Authority. Employees would be automatically signed up for a contribution of 6 percent, but could lower the amount or opt out.

Lembo said the automatic payroll deduction with an opt-out would be an important nudge toward savings in a country where, according to the federal government, nearly half of unmarried Social Security beneficiaries rely on the program for at least 90 percent of their income.

“In an ideal world, we would all not procrastinate. We would all do the right thing as we know it to be true,” Lembo said. “We would take money from our paychecks. We would go start a retirement account. But human behavior being what it is, we are working against the tide.”

AARP, the advocacy group for older Americans, says the availability of payroll savings plans is crucial to savings rates: Without payroll plans, fewer than 5 percent of workers invest in retirement plans, compared to more than 70 percent when there is an employer-based plan.

Lembo said the proposed law could be a boon to private-sector investment firms. Since the state-sponsored product is geared to workers not in the investment market, it doesn’t compete for customers, he said.

When the United Kingdom adopted a similar plan, it spurred private employers to offer a non-governmental payroll savings plan.

“That could be good news for everybody. My goal in this is not to own the market,” Lembo said. “My goal in this is to spur innovation, to push folks to do things that we know are in their best interest – understanding that they can always opt out.”

In a public hearing before the legislature’s Labor and Public Employees Committee, business groups testified against the proposal. The investment industry called it unnecessary, while businesses complained it was a state mandate.

“The market for retirement savings products in Connecticut is robust and highly competitive. Indeed, there are over 25,000 individuals in the state working in the securities industry and over 111,000 people employed by entities falling within the broader category of finance and insurance,” said Kim Chamberlain of the Securities Industry and Financial Markets Association. “Where an employer does not provide a plan, IRAs are readily available on-line and at most financial institutions.”

“The Connecticut plan opens up access to a secure and affordable employment-based retirement savings opportunity from which minority communities have been historically excluded,” he said. “It will also help to create a culture of saving and financial literacy  that will benefit financial services firms.”