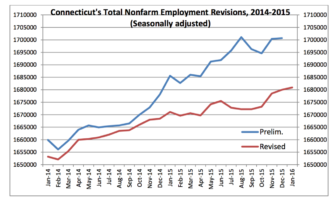 Despite gaining 900 jobs, Connecticut’s unemployment rate rose slightly in January from 5.4 to 5.5 percent, the state Department of Labor reported Friday.

The Labor Department also significantly reduced its original job growth projections for 2015 by 14,700 positions. Original job growth of 26,900 was reduced to 12,200. That means Connecticut only has recovered 73 percent, or 86,700 of the jobs lost in the last recession and also hasn’t recovered all private-sector jobs lost.

Gov. Dannel P. Malloy’s administration hailed it as a strong sign of economic growth late last year when the department declared that all private-sector jobs lost in the last recession had been recovered. But after applying adjustments, the department now says the private sector has regained 96,100 or 86 percent of the jobs it lost in the last recession.

The new jobless rate still is down from the 6.1 percent ratio recorded in January 2015.

“While the numbers demonstrate progress — with the private sector growing over 11,000 jobs over the year — these numbers are also emblematic of our new economic reality,” Malloy said Friday. “We have been positioning the state to support long-term growth to meet our new reality as we work to make changes that will lead to even greater gains in both total job growth and overall wages.  I won’t be satisfied until everyone who wants a job has one.”

So how did the department’s original job growth estimates for 2015 come to be off by more than 50 percent?

“What happened shouldn’t have happened,” said Andy Condon, director of the department’s Office of Research. “It very rarely happens, but unfortunately in this case, it did.”

The department’s monthly job growth estimates are based on job and wage data from a limited sample of businesses. That sample turned out to be poor and “was not entirely reflective of the population,” Condon said.

But it wasn’t clear that the sample was bad until the year-end review — using much more detailed quarterly business census reports — was compiled, he added.

The state’s chief business lobby, the Connecticut Business and Industry Association, said the downgraded job growth should spur state officials to immediately begin to reduce the size of government.

“The economy still has some challenges with it,” CBIA economist Peter Gioia said, adding that 2015 now shows the slowest year for job growth since the last recession ended in 2010. “Yes we’re growing, but we’re growing at perhaps a slower pace than we anticipated or hoped for.”

House Deputy Minority Leader Vincent Candelora, R-North Branford, said of the revised labor statistics, “It appears the job growth in Connecticut was grossly overstated and that the governor’s repeated comments that our state has recovered all the (private-sector) jobs it had lost in the recession were at best premature. We now just lost 14,700 jobs because of errors in computing job growth.’’

The leisure and hospitality super-sector led the way with 2,000 new jobs, but gains also were recorded in: financial activities; other services; construction and mining; and manufacturing.

Four of the major super-sectors lost jobs, led by education and heath services, which was down 2,300 positions in January. Losses also were recorded in: government; professional and business services; and trade, transportation and utilities.

The information super-sector was unchanged in January.

The Hartford-West Hartford-East Hartford and Norwich-New London-Westerly markets were up 5,200 and 1,900 jobs, respectively.

The New Haven market lost 3,400 jobs and Bridgeport-Stamford-Norwalk was down 1,900.