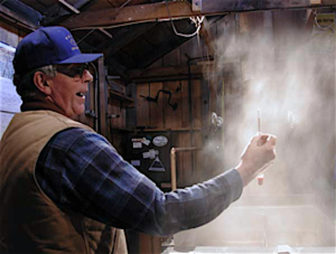 Ron Wenzel of the Wenzel Sugarhouse in Hebron tests the maple sap as it concentrates into syrup.

Washington – It’s a sticky situation, but U.S. Rep. Joe Courtney and other Connecticut lawmakers are backing the state’s maple sugar producers, who say they – and consumers – are being hurt by those who mislabel their products as containing maple.

Courtney visited the Bats of Bedlam maple syrup farm in Chaplin and the Wenzel Sugarhouse this week to speak with some of the state’s maple syrup producers.

They want the Food and Drug Administration to investigate food companies, including Quakers Oats, that they say label their products as “maple flavored” when they don’t contain any maple syrup. Federal regulations require food products to contain at least 2 percent maple syrup to be able to say they’re maple flavored.

“There’s a whole lot of difference between that fake-y stuff and real maple syrup,” Courtney said. “I can sympathize with the frustration of maple farmers who are angry that large companies and corporations are getting away with blatantly misrepresenting their products as containing maple syrup when they do not.”

He and more than 30 other lawmakers from the “maple belt” have asked the FDA to “exercise its legal authority to investigate and take action against misbranded products in interstate commerce.” The maple belt includes Vermont, New York, Rhode Island, Maine, Massachusetts, Pennsylvania, Ohio and Michigan. In the United States, Connecticut produces the least maple syrup, about 9,000 gallons a year, and Vermont the most, about 890,000 gallons a year.

But Quebec province in Canada is the largest maple producer in the world, with nearly 8 million gallons harvested every year.

Blumenthal said consumers might be surprised to know that products like Quaker Oats Maple and Brown Sugar Instant Oatmeal and Hood Maple Walnut Ice Cream do not  contain actual maple product and are instead sweetened by regular sugar or corn syrup. Among its ingredients, Quaker instant oatmeal lists “natural and artificial flavors,” and does not use the word “maple.” Neither does the ingredient panel of the Hood ice cream. It mentions only “natural flavor.”

Neither Quaker Oats nor Hood Products had an immediate response.

To Courtney, the process of making maple sugar is both time and labor intensive. 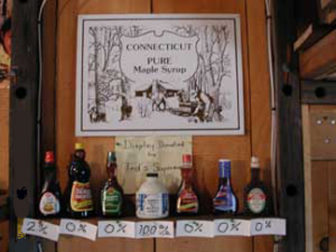 A display comparing the amount of maple syrup in various syrup products.

“Genuine maple syrup has a high value because consumers are willing to seek out, and pay a premium for the natural product containing 100 percent tree sap. When a company sells an inferior product made of corn syrup or artificial flavoring and calls it maple, they are actually stealing from the livelihoods of farmers who count on the income made from producing real maple syrup.”

He also said he’s glad members of Congress have offered to help.

“This is the first time that those in Washington are listening to maple syrup producers,” he said.

For Mark Harran, the president of the Maple Syrup Producers Association of Connecticut, the issue is broader than the money that Connecticut maple syrup producers may lose when food products are mislabeled.

“It’s not the lifestyle and prosperity of maple producers, it’s saving the consumer from fraudulent behavior,” Harran said.