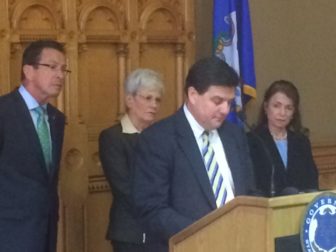 The governor, who accepted the resignation of the DMV commissioner in January amid chronic computer problems and near-nightly television stories about long lines and angry customers, named Michael Bzdyra as commissioner and Judeen Wrinn as deputy.

Wrinn’s title, however, is a misnomer. The former executive of Aetna, ING and Voya will have one full-time job: to diagnose and repair a customer-service disaster that DMV officials blame on a new computer system that went live in August.

“The DMV should not be a form of punishment,” Malloy said.

Wait times for service have been an issue at the Department of Social Services, which is responsible for vital programs that help feed and clothe the poor. But Malloy shook his head when asked if anything matched the political grief that comes with customer-service problems at the DMV, which serves nearly every adult.

“Nooo,” he said, drawing out the word. “Absolutely not. For every governor, this is their Obamacare, the roll out, right?”

Malloy referred to the overwhelmed computer system that nearly sank the new health insurance system at its launch, a cautionary example for every elected official confronted with an agency that needs a new computer system.

Bzdyra, a former official of the Connecticut Resources Recovery Authority, has been a DMV employee since 2011, most recently as a deputy commissioner.

Wrinn retired in December 2014 as the chief operating officer of the U.S. retirement business of Voya Financial, the company spun off and rebranded by the Dutch financial company ING in 2013.

“This is a team,” Malloy said.

The administration recruited Wrinn at the recommendation of Catherine Smith, a former Aetna and ING executive who serves as the commissioner of economic and community development. Smith recalled Wrinn’s role years ago in helping Aetna turn around a call-center fiasco that soured customer relations.

“Catherine floated my name,” Wrinn said. It was left to Mark Bergman, the governor’s deputy chief of staff, to talk her out of retirement and into her first job in government.

She described those metrics as wait times, accuracy of the work, ease of doing business and customer satisfaction. At the DMV, wait times reached nearly three hours, though Bydzyra says they have fallen below an hour.

Without mentioning Aetna by name, she described being asked to fix the company’s new call center, which kept customers waiting so long calls timed out and were disconnected.

“The customers were screaming and the employees were crying every single day. If you think I am exaggerating, I am not. I lived it,” Wrinn said. “I took the challenge, pulled together a team of managers, employees, partners in I.T. and we dug into the issues.”

When she was approached about the DMV, she said “it felt eerily familiar to me.”

“DMV’s customers are our families, our friends, our neighbors. They don’t deserve this,” she said.

Malloy’s press conference coincided with a public hearing about a bipartisan bill that would totally privatize the DMV, a concept unlikely to proceed. The governor does favor expanding privatization beyond the renewal of drivers’ licenses at AAA offices.

Dennis Murphy, the deputy commissioner of labor, whose relationship with Malloy reaches back to the governor’s tenure as mayor of Stamford, was temporarily assigned to DMV after Andres Ayala resigned as commissioner.

Ayala quit while the department struggled to implement a new computer system, which was blamed for long lines and other problems at the one state department that interacts with nearly every adult in Connecticut.