In ’16 fight for Assembly, winner gets to pick up a big tab 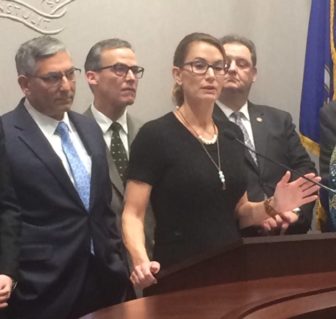 It’s a question that draws knowing smiles, solemn nods and the occasional nervous laugh from Republicans: Given the depth of Connecticut’s fiscal crisis, would the GOP actually be better off remaining as the General Assembly’s minority party for at least another two years?

No one is suggesting that Republicans deliberately ease up on their efforts to win control of a legislative chamber for the first time in 22 years. Or that a GOP takeover is even likely this fall, given that they would need to pick up 12 seats in the House and four in the Senate.

But they concede that the same crisis they are using to sell Connecticut on the need to end to one-party government is double-edged. If voters agree with them, the GOP would instantly assume shared ownership of what is now a Democratic problem.

An added wrinkle is a bipartisan consensus at the State Capitol that the problem is only growing worse: a $220 million current-year deficit is projected to become a $900 million shortfall next year and blossom into a $2 billion gap in 2018.

“There is no question that whoever is in the majority after November is facing a very, very daunting task, no question about it,” said House Minority Leader Themis Klarides, R-Derby. “But that’s what we’re elected to do. I don’t know how else to say it.”

So, could the GOP lose for winning?

“No question about it, no question there’s a political risk, because we have not been in the majority,” said Senate Minority Leader Len Fasano, R-North Haven. “If we are fortunate enough to get into the majority, people are going to expect a lot of things to happen.”

Fasano, Klarides and other Republicans say they would happily take on responsibility for tackling huge budget shortfalls in 2017 and 2018.

“This is the reality of our life now,” Klarides said, referring to what seems to be a time of chronic revenue shortages. “And I would say there is even more of an opportunity now, if we are in the majority, to be able to implement these policies we’ve been talking about and stomping our feet and screaming at the top of our lungs for the past year – or nine years.”

“It will be very difficult, no question about it,” Klarides said. “And I’m sure there will be a time when we’ll sit there and say, ‘How are we going to handle this?’ We want that opportunity.”

The Republicans offered a plan this week to address the current-year deficit, an element of a campaign to demonstrate that after decades in the minority, free to duck tough budget votes, they are ready to make hard decisions on spending. The governor’s office offered measured praise.

But Democrats in the legislature say they are dubious.

“I don’t see much evidence of the minority party’s willingness to take on the tough decisions that have to be made,” said House Speaker J. Brendan Sharkey, D-Hamden. “It’s easy to criticize the majority party when they are the ones who have to be the adults to actually produce a budget and make the tough decisions. It’s much easier to be in the minority and throw out your criticisms, your ideas and then walk away and never vote for them.” 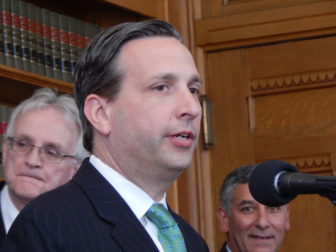 Last year, the GOP proposed an alternative two-year budget that relied on the Malloy administration’s obtaining $630 million in labor concessions. At the same time, Republicans proposed net tax cuts of $270 million over the biennium.

“The Republicans in the Legislative Office Building have a tendency to try to sell the notion that you can eat cake and try to lose weight at the same time,” said Senate Majority Leader Bob Duff, D-Norwalk. “If they were serious about their various proposals, they would have to get past smoke-and-mirror concepts of government.”

The Republicans insist they are contributing to the budget debate, even if their members voted against last year’s budget in June and a deficit mitigation plan in special session in December.

“It’s not as though we’re sitting on our hands and letting the majority make all the hard decisions,” said Sen. Tony Hwang, R-Fairfield, who is considering a run for statewide office in 2018. “We’ve come out with our budgets and our solutions and our rescissions.”

Sen. John Kissel, R-Enfield, who was elected in a special election in 1993, is among the few GOP lawmakers with experience serving in the majority. Republicans won a 19-to-17 majority in 1994, when Republican John G. Rowland won the first of his three terms as governor. Democrats regained control in 1996, when President Bill Clinton was re-elected.

“The notion that perhaps we want to jump off the Titanic before it sinks is not the direction I would go,” Kissel said. “I’d much rather see our party at the table trying to ameliorate the problems facing us.”

Republicans last won a majority in the House in 1984, boosted by President Ronald Reagan’s landslide re-election victory over Walter Mondale. It also was the last time the GOP won both chambers.

In 2008 when Barack Obama was elected president, Democrats gained seven seats in the House and two in the Senate, producing majorities of 114 to 37 and 24 to 12 in Hartford. But the GOP rebounded strongly in 2010 and lost no seats in Obama’s re-election year of 2012.

The Democratic advantage has shrunk to 86 to 64 in the House, with one vacancy, after the recent resignation of Rep. Victor Cuevas, D-Waterbury, and 21 to 15 in the Senate. Democrats are expected to regain the seat in a special election April 26.