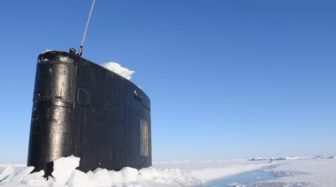 The USS Hartford just after surfacing above the Arctic Circle.

Washington –Sen. Chris Murphy says one reason he spent  the weekend under Arctic ice aboard the USS Hartford is to become a better advocate for the state’s shipbuilding industry and the Naval Submarine Base, New London.

A member of the Senate Appropriations Committee, Murphy has joined Rep. Joe Courtney, a fellow Democrat who represents the 2nd District, home to Electric Boat and the sub base, in an effort to seek more money for the Virginia class submarines that EB makes.

In its proposed budget for next year, the Navy has committed itself to continuing to build two submarines. But advanced procurement money, to begin work on the two submarines that would be built by Electric Boat in 2019, was cut by about $85 million.

Courtney has asked the Navy to restore the funds. Murphy has, too.

The lawmakers also are intent on persuading the Navy to continue its two-a year pace on the Virginia-class subs in 2021, the year construction will start on the first Ohio-class replacement submarine, a  561-foot-long boat that could cost as much as $6 billion and carry nuclear ballistic missiles.

Electric Boat is expected to build the Ohio-class replacement submarine, just as it built its predecessor and is building the Virginia-class now.

“The Navy has a good reason to propose a temporary pullback on the Virginia -class, but we have to find a way to do both,” Murphy said.

He also said, “This is a challenge to find the money to get this done.”

“I took this trip so I could be a much better advocate for the Virginia-class sub,” Murphy said.

On Saturday, he traveled to Deadhorse, Alaska, before continuing on to U.S. Navy Ice Camp SARGO – a temporary station on top of a floating ice sheet in the Artic. Also on the trip were Sens. Roger Wicker, R-Miss., and Reps. Steve Womack, R-Ark., and Derek Kilmer, D-Wash.

The lawmakers boarded the USS Hartford, a Los Angeles-class sub that was built in Connecticut, as part of Ice Exercise 2016. ICEX is a five-week exercise aimed at assessing the operational readiness of the submarine force and advancing scientific research in the arctic.

Murphy said it was important to increase the Navy’s submarine fleet to ward off threats from China and Russia.

“It is not clear how tethered to reality [Russian President Vladimir] Putin is, and it should make us nervous that some of their submarines are dangerously close to U.S. allies,” Murphy said.

He also said, “We have reason to believe” Chinese and Russian subs “are a threat to commercial shipping.”

Although Murphy said he learned a lot about submarines under the Arctic ice, there was some R & R too, especially on Saturday night when the sailors “let their hair down” and dined on pizza.

There was also time to take in a movie – The Hunt for Red October,” a film about a rogue Soviet naval captain who wants to defect to the United States with his officers and his nation’s newest and most advanced nuclear-missile submarine.

“It was fun to hear submariners critique The Hunt for Red October,” Murphy said.