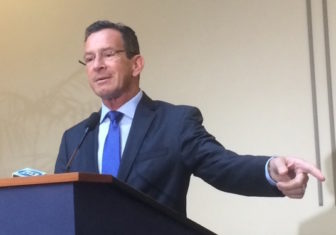 While a high-ranking Republican on the State Bond Commission charged Connecticut’s borrowing is headed for a crisis, the Democratic governor fired back that GOP legislators are quick to criticize — but still happy to take credit when state bonding pays for projects in their districts.

The administration has set a $2.7 billion “soft bonding cap” for the 2016 calendar year, Malloy told reporters after Thursday’s commission meeting.

The cap refers to general obligation bonding – loans repaid with receipts from income, sales and other taxes dedicated to the general fund. Those funds are used for municipal school construction, capital projects at public colleges and universities, state building maintenance, open space and farmland preservation, and various smaller projects.

It does not involve bonding for transportation projects, which is repaid with fuel tax receipts.

Connecticut, which has more than $22 billion in bonded debt, already has one of the highest per capita debt burdens of any state in the nation. 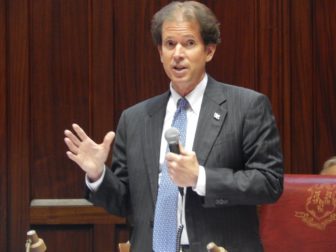 And Sen. L. Scott Frantz, R-Greenwich, who serves on the bond commission, noted Thursday that Connecticut is almost halfway toward its annual  bonding cap just three months into the year.

“I’m getting more nervous than I was before,” Frantz told the governor.

“Tell the citizens what you wouldn’t spend the money on,” Malloy responded, adding that neither Frantz nor his GOP colleagues object when state financing is used for projects in their communities.

Frantz and Malloy have sparred frequently over the past three years as state borrowing has escalated rapidly.

Annual general obligation bonding has nearly doubled since 2012, when Malloy had set the cap at $1.4 billion.

Three of the four Wall Street rating agencies have attached a “negative outlook” to Connecticut’s bond rating, warning it will be watched closely over the next year and could be subject to a downgrade that would be likely to raise interest costs for the state.

Nonpartisan analysts also project Connecticut will exceed another statutory cap on borrowing next fiscal year unless it cancels close to $400 million in previously authorized bonding before July 1.

But the governor said Connecticut is not the only state facing heightened scrutiny from Wall Street. “It’s clear that the bond market and those who rate risk are concerned on a more general basis,” he said.

Malloy also argued that “we need to make investments in our state,” such as the $500 million in borrowing approved Thursday for municipal school construction.

But Rep. Vincent J. Candelora, R-North Branford, a veteran member of the legislature’s Finance, Revenue and Bonding Committee, said after the meeting that state government — since Malloy became governor — has increasingly used its credit card to cover operating costs, and not just for capital projects that create jobs.

Connecticut is expected to use more than $160 million in bonding both this fiscal year and next to make debt payments. In other words, the state is borrowing to pay off borrowing.

Malloy has said Connecticut faces a “new economic reality” and must make tough spending cuts to balance its budget, but the governor’s approach to the credit card doesn’t match this philosophy, Candelora said. “He certainly can’t have it both ways.”

In the last two years of Malloy’s first term, leading up to the 2014 gubernatorial election — which Malloy won by defeating Greenwich Republican Tom Foley — the governor and the legislature’s Democratic majority moved hundreds of millions of dollars of operating expenses onto the credit card to avoid pre-election tax hikes.