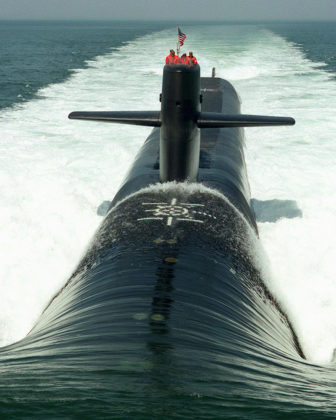 An Ohio-class ballistic-missile submarine under way. Electric Boat has been named the prime contractor on a new class of submarines to replace the Ohio class.

The Navy also said it would move assembly and delivery of some Virginia-class submarines to Newport News Shipbuilding in Virginia, but it does not say how many.

In December the Congressional Budget Office said the total price tag of the Ohio-class replacement boats will be between $102 and $107 billion. Congress still has to appropriate funds for the program.

In announcing its new Submarine Unified Build Strategy (SUBS), the Navy said it plans concurrent production of the ballistic-missile-firing Ohio-class replacement submarines and Virginia-class attack submarines. Construction of the first Ohio-class replacement sub is scheduled to begin in 2021, and deliveries of Virginia-class subs will continue through at least 2023.

“To execute this strategy,” the Navy said Monday, “General Dynamics Electric Boat Corporation has been selected as the prime contractor for (Ohio-class replacement subs) with the responsibilities to design and deliver the twelve (Ohio-class replacement) submarines. Huntington Ingalls Industries-Newport News Shipbuilding will participate in the design and construct major assemblies and modules, leveraging their expertise with Virginia-class construction,” the Navy said in a statement.

The Navy also said, “Both shipbuilders will continue to deliver [Virginia-class submarines] throughout the period, with Electric Boat continuing its prime contractor responsibility for the program. Given the priority of the [Ohio-class] submarine program, the delivery of [Virginias] will be adjusted, with [Newport News Shipbuilding] performing additional deliveries. Both shipbuilders have agreed to this build strategy.”

Electric Boat, which has major facilities in Groton and nearby Quonset Point, R.I., said it “looks forward to continuing to work with the Navy and Newport News Shipbuilding to build the next generation of ballistic missile submarines.”

“For Connecticut, today’s announcement underscores the positive outlook for growth, not just at the Groton shipyard, but across the region and state,” said Rep. Joe Courtney, whose 2nd congressional district includes Electric Boat’s shipyard and the New London Naval Submarine Base.

Courtney said, “With Electric Boat now firmly at the lead of this top national priority, in addition to the work already being done on our Virginia-class submarines, our region can continue to have confidence in the growing impact that this work is having on Groton and the hundreds of suppliers who work every day to support our submarine program.”

Courtney also said the Navy told him it intended to maintain a two-a-year pace for building Virginia-class subs through at least 2023, including an added boat in 2021.

Sen. Richard Blumenthal, D-Conn., said, “Today’s announcement by the Navy solidifies Groton’s position as the Submarine Capital of the World.”

Sen. Chris Murphy, D-Conn. said, “The U.S. Navy continues to invest in Electric Boat for one reason: they’re far and away the best company when it comes to advanced undersea warfare.”