They back Hillary, but are careful to praise Bernie 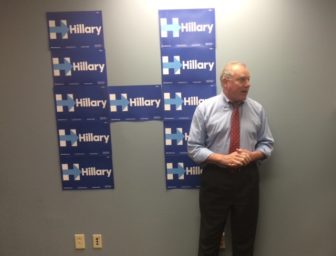 The strength of Bernie Sanders’ appeal in Connecticut was evident Monday night at the opening of a headquarters for Hillary Clinton in the North End of Hartford: Each speaker took care to say something nice about the U.S. senator from Vermont.

“We love Bernie Sanders,” said U.S. Rep. John B. Larson, who represents greater Hartford. “He’s an old curmudgeon, but a curmudgeon in a good way, in terms of what he stands for and what he stood for in his career.”

“Bernie Sanders comes from Brooklyn, N.Y., so he’s not such a bad guy,” said a smiling Lt. Gov. Nancy Wyman, who never shook her Brooklyn accent over decades in Connecticut. “It’s definitely not against Bernie by any means.”

“I love Bernie Sanders. What’s not to love about Bernie? He’s just a great, great guy,” Attorney General George Jepsen said. “I feel the ‘bern,’ but I’m afraid if he’s nominated – and he won’t be – it’s the Democratic Party that’s going to get burned.”

Jepsen’s rationale is that Sanders, 74, a self-described socialist whose staff recently acknowledged to the New York Times his initial goal was to raise issues, not win the nomination, has yet to face the withering attacks that would come if he is the Democratic nominee for president.

The establishment is backing Clinton in Connecticut, just as it did in New Hampshire, where Sanders won big, and in Massachusetts, where Clinton eked out a narrow victory. Gov. Dannel P. Malloy, who was out of state at a Democratic Governors Association event, missed the opening.

Connecticut Democratic primary voters can be cool to frontrunners. In 1984, they went for Gary Hart, not the eventual nominee, former Vice President Walter Mondale. In 1992, they voted for Jerry Brown, embarrassing Bill Clinton soon after he became the frontrunner.

Jepsen, Larson, Wyman and state Rep. Brandon McGee, who represents the predominantly black district where the headquarters is located, all praised Hillary Clinton, a former first lady, U.S. senator and secretary of state, as perhaps the best-prepared candidate ever to run for president.

Their criticism of Sanders centered on electability.

“He’s had a kind of a honeymoon so far, not one ounce, not a single dollar spent against him from the far right,” Jepsen said. “Hillary Clinton, on the other hand, has had 25 years of relentless, devastating attacks from the far right. Tens of millions, hundreds of millions of dollars spent against her and you know what? She’s still standing. She’s ahead in the polls. I’m afraid that once the Koch brothers and the far right are done with Bernie, he may not be standing.”

Neither candidate has had a major campaign event in Connecticut, though Clinton and her husband have come here to raise money. Bill Clinton headlined a fundraiser at Jepsen’s home in West Hartford.

The Connecticut primary is April 26, the same day as neighboring Rhode Island’s.

Sanders opened a Hartford headquarters on Saturday in the same old industrial complex that houses the Working Families Party, the labor offshoot that has endorsed Sanders. But some of the unions that fund the Working Families are either neutral or backing Clinton. Her labor backers include the American Federation of State, County and Municipal Employees.

Lori Pelletier, the head of the Connecticut AFL-CIO, said the organization is neutral and sitting out the primary.

Sanders could win in Connecticut and still leave with fewer delegates than Clinton. At stake in the primary are only 55 of the state’s 71 delegates.

There are 16 super delegates from Connecticut who will go to the Philadephia convention as unpledged, but expected to support Clinton.

According to the state party, they are: Malloy, Wyman, members of the congressional delegation, members of the Democratic National Committee who reside in Connecticut, and Chris Dodd, the former senator and Democratic national chairman who is entitled to a delegate under national rules as a “distinguished party leader.”