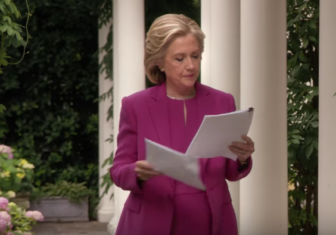 Hillary Clinton’s campaign says it will begin airing television commercials in Hartford and New Haven on Saturday, the latest evidence that Connecticut remains in play in her race with the surging Bernie Sanders for the Democratic presidential nomination.

Sanders, meanwhile, has bought time on at least one Connecticut station, with the commercials to begin airing Monday, according to a filing with the Federal Communications Commission.

Clinton, a frontrunner who has seen the protest candidacy of Sanders grow into a bonafide challenge, already is airing commercials on New York television, which spills into Fairfield County. “New World,” the spot going up, presents Clinton as ready to be president. It makes no mention of Sanders.

“The world a president has to grapple with, sometimes you can’t even imagine. That’s the job, and she’s the one who’s proven she can get it done,” the narrator says over footage of her at the White House, exiting Air Force One and sitting down with Russian leader Vladimir Putin. “The presidency is the toughest job in the world, and she is the one who will make a real difference for you.”

Sanders campaign will air 140 commercials on WTIC, the Fox affiliate in Hartford, at a cost of $33,630, according to the station’s filing with the FCC. An industry source says the campaign has purchased time at other stations.

The Sanders’ campaign has not released a copy of the ad it intends to air in Connecticut. A campaign spokesman declined comment on its media plans.

Stations are required to file details on political ad buys with the FCC. WTIC is the only Connecticut station with a public notice on the FCC web site regarding an ad purchase Friday night. It also lists a preliminary purchase order from the Clinton campaign, though no details. WVIT, the NBC affiliate, reported an inquiry from Clinton on rates.

Sanders is on a winning streak, defeating Clinton in five of six contests since March 22, including the Wisconsin primary on Tuesday.

Clinton lost to Barack Obama in the Connecticut primary in 2008. Fifty-five delegates will be apportioned based on the results here. The state also has 16 superdelegates not bound by the primary. All but one is believed to be supporting Clinton.