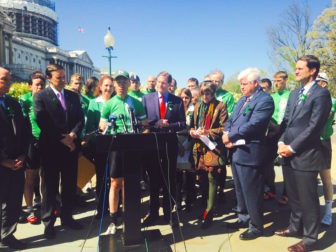 Monte Frank, leader of the “Team26” cyclists who arrived in Washington from Newtown Tuesday, is surrounded by members of the Connecticut congressional delegation and his fellow riders as he advocates for federal action on gun control.

Washington – In what is becoming a spring ritual, “Team 26” a group of cyclists arrived here from Newtown to honor victims of gun violence – and participate in a bit of Congress bashing.

Named after the 26 people slaughtered on Dec. 14, 2012, at Sandy Hook Elementary School, the group of 26 bicyclists rolled through cold, wet weather on their way south, passing through Newark and Morristown, N.J., Philadelphia and other towns where they were met with rallies and other forms of support.

This is the fourth time since 20 first graders and six educators were gunned down in Newtown that the riders have made the nearly 400-mile journey. They ride because they want people to remember Newtown’s victims, and other victims of gun violence.

They are also trying to prod a recalcitrant Congress to act.

“It is unfathomable that Congress refuses to act,” said team leader Monte Frank. “While we were ‘Team 26’ for Newtown, we could easily have been named for any weekend in Chicago.”

The team assembled for a press conference, attended by all seven members of Connecticut’s congressional delegation, outside the Capitol on Tuesday.

The Connecticut lawmakers sharply rebuked their colleagues inside the domed edifice at their back.

“The American public knows exactly what needs to be done and yet this building does absolutely nothing,” said Sen. Chris Murphy, D-Conn. Rep. Jim Himes, D-4th District, said his colleagues are “in a zombie-like torpor,” when it comes to action on gun control.”

Rep. John Larson, D-1st District, thundered that the House of Representatives’ failure to take up a bill that would extend FBI background checks of gun buyers was “immoral and not justified.”

“Since the tragedy in Sandy Hook, more than 500 children have lost their lives to gun violence in this country. And in that time, the House has not held a single vote on gun safety legislation. We cannot wait any longer for Congress to do its job,” she said.

A few months after the Sandy Hook tragedy, the Senate rejected a bill that would have expanded FBI checks of gun purchasers to include sales by individuals on the internet and at guns shows.

The House never brought up the legislation.

Sen. Richard Blumenthal, D-Conn., spoke about a bill he and Murphy introduced earlier this year that would repeal a 2005 law that protects gun manufacturers and dealers from liability when crimes are committed with their products.

“It belongs in the waste bin,” Blumenthal said of the Protection of Lawful Commerce in Arms Act.

Blumenthal said the “abhorrent” law “closes the courtroom doors” to lawsuits like the one filed by some of the parents of the children killed in Newtown against the maker of the Bushmaster rifle that was used by Adam Lanza in the massacre.

Congress isn’t expected to take up gun safety legislation. But it has become an issue in the Democratic primary race for the White House, with Hillary Clinton bashing rival Bernie Sanders for his 2005 vote for PLCCA.

Sanders has changed his position on PLCAA, however, and is one of the 12 co-sponsors of a bill Blumenthal and Murphy introduced earlier this year that would repeal the law.

While nobody expects congressional action on gun control, at least not anytime soon, Blumenthal said he hoped the annual bike pilgrimage to Washington aimed at prodding Congress to act will someday “be a thing of the past. Murphy is taking the long view on the issue, saying there’s a need to build a political movement around anti-gun efforts, to counter the influence of the National Rifle Association and other gun-rights groups on Congress.

After the press conference, Murphy, Blumenthal and  Esty went to the White House to meet with presidential advisor Valerie Jarrett to discuss gun control.

So did the members of “Team 26.” But unlike the lawmakers, they pedaled their way there.