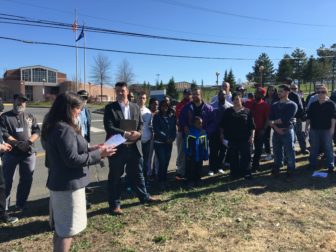 MIDDLETOWN — Dozens of people gathered outside Connecticut Juvenile Training School Thursday to protest state layoffs that cut about one-third of the facility’s staff last weekend, creating what one union official called a “potentially life-threatening situation” for those remaining.

Labor leaders stood alongside current and former staff members at the state-run jail for juveniles, saying they wanted to raise awareness about the consequences of the state’s decision to lay off 106 of the facility’s 326 staff. They called the move “heartless” and “inhumane” for students there.

The state Department of Children and Families acknowledged the large number of layoffs in a statement Thursday, but said the staff-to-student ratio remained higher than in previous years even after the reductions.

DCF Commissioner Joette Katz said remaining staff are “fully capable and prepared to address the needs of the youth” and that the facility maintains a 5.9 staff-to-student ratio, up from 4.1 in 2015 and 2.5 in 2014.

The facility’s population has shrunk from a 10-year high of 165 students in 2014 to 37 this week. Staff numbers had remained relatively unchanged over that span – until now.

“It’s bad enough workers are losing their jobs,” said Stephen Anderson, president of CSEA/SEIU Local 2001, which represents the staff at the facility. “The last thing we need now is to create a potentially life-threatening situation as a result of these layoffs. This has not been the orderly process we were promised.”

The process Anderson was referring to is Gov. Dannel P. Malloy’s plan to close CJTS by July 1, 2018. The facility houses students who have been convicted of crimes in juvenile court. Many current and former staff who spoke said they were concerned about the effect of the sudden change on the students and their behavior.

Most of the frustrations voiced at the event were not about the layoffs themselves, but their timing and the process. Staff members were “told to leave without even having a chance for closure and goodbyes,” special education teacher Paula Dillon said.

She warned of “anger and frustration” among students who left class last Friday and came back Monday to find that staff with whom they had developed close relationships had been laid off.

The consequences, Dillon said, are already beginning to materialize. She said a fight between two students had to be broken up Wednesday, leading to an assault on a gym teacher.

“It wasn’t just the result of a student that went awry and did something wrong based on just bad behavior,” Dillon said. “It was a result of these layoffs that took place that put people in a situation that was completely done without any planning.”

Dillon said reassignments placed staff members who were unfamiliar with certain students in a situation where “they had to adjust very quickly.”

State officials disagreed with that assessment. Katz said in a statement she took the situation “extremely seriously,” but denied any link between the assault and staff reductions.

“This random, spontaneous fight that occurred on Wednesday morning between two students at CJTS had no relationship whatsoever to the workforce reduction, which has been anticipated and planned for an extended period of time due to the significant decline in the number of youth served in the program,” Katz said.

The gym teacher who was assaulted is expected to return to work “following the school vacation next week,” Katz said.

Sen. Danté Bartolomeo, D-Meriden, said whether the layoffs were necessary is “not the issue.” She said the facility has become “a political football,” and the way in which staff members were laid off was “unconscionable.”

Bartolomeo said the state needs to learn “not every situation … should be treated the same” way. She said the relationship between students and staff at CJTS is not the same as in “an office staff in a central agency,” and layoffs should have been handled with more care as a result.

The future of CJTS has been controversial since 2015, especially after videos of youth being violently tackled were made public by the Office of the Child Advocate and an investigation condemned the practice of confining youth for extended periods. Several national juvenile justice and mental health experts also have released reports outlining problems with the state’s juvenile justice system.

Amid the controversies, Malloy announced his intention in December to phase out the facility.