CT high school population shrinking faster than in 47 other states

Connecticut is expected to have the nation’s third-fastest decline in students enrolled in high school over the next 10 years, the U.S. Department of Education reports. 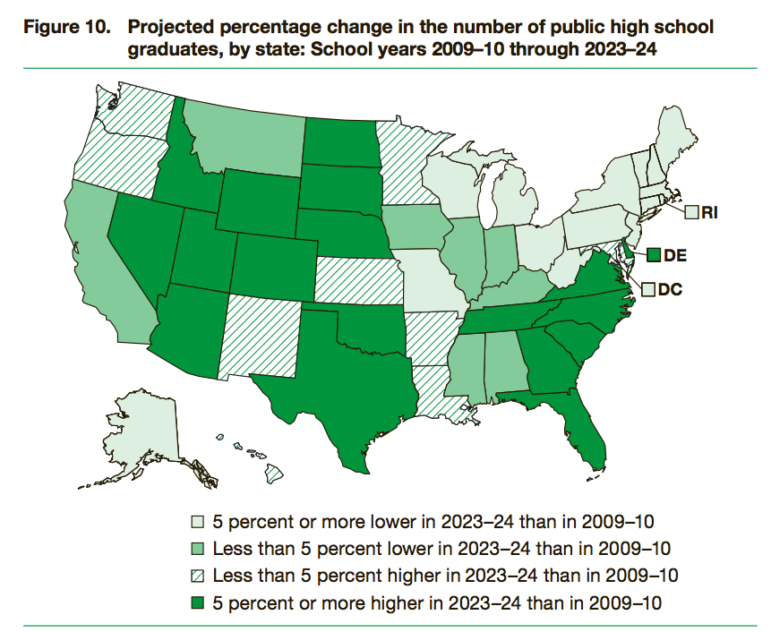 This anticipated 11.6 percent decline means an estimated 17,400 fewer students will be attending high school in 2024 than in 2012, and 5,400 fewer will be graduating each year. Only New Hampshire and Vermont are expected to have larger declines during the same period, with estimated drops of 14.1 percent and 12.1 percent, respectively.

Nationwide, the percentage of high school students is expected to increase by 2.7 percent, the report, issued Thursday, said.

Connecticut has seen steady decreases in the number of students of all grades attending public school in the state over the last decade. This report, however, shows the decline is largely among high school students. The number of students estimated through grade 8 is not expected to change much, or 0.3 percent by 2024.

This huge decrease in high school students is likely to affect the state’s public colleges and universities, as recent graduates are a major pipeline for college enrollment.

High school enrollment in Connecticut’s schools has declined by 3.6 percent since 2006, and there have been major losses of enrollment at the state community colleges and regional Connecticut state universities.