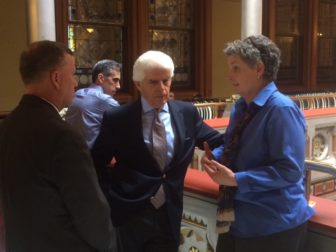 The Senate passed compromise legislation Tuesday that would regulate but not prohibit a plan by Niagara Bottling to treat, bottle and sell up to 1.8 million gallons of tap water daily at a plant planned for the Hartford suburb of Bloomfield.

The legislation would affect any bottler of more than 500,000 gallons of water daily, but was prompted by opposition to Niagara, the largest family-owned bottled water company in the U.S., using water supplied by the Metropolitan District Commission.

The bill faces an uncertain fate in the House after passage on a 24 to 11 vote in the Senate.

The vote was a setback to William A. DiBella, a former Senate majority leader who strenuously lobbied against the bill as chairman of the MDC, the regional water authority for greater Hartford.

“Is this a ploy to kill the plan by the bottling company? I don’t know,” DiBella said. “I don’t know what impact that’s going to have on Niagara. If Niagara’s decision is not to come, it’s going to cost MDC ratepayers about $3.8 million.”

Stan Bratskeir, a spokesman for Niagara, could not be reached for comment. Niagara’s plan was to start with one bottling line with a daily capacity of fewer than 500,000 gallons and eventually expand to four lines.

At full capacity, Niagara would pay the MDC $3.8 million annually after a new large-user discount the commission established to attract the bottling company, DiBella said.

Environmentalists and a citizens group that quickly organized opposition to Niagara’s plans to build in Bloomfield celebrated passage of the legislation, sponsored by Sen. Beth Bye, D-West Hartford, whose district includes Bloomfield.

“Scores of citizens approached me months ago with concerns about who controls our water here in Connecticut, why some commercial water bottling companies have price advantages over those MDC residents who helped improve and pay for the MDC infrastructure, and also with concerns about the availability of water in a drought,” Bye said. “All of those concerns rang true to me, and resulted in today’s bill, which I am proud to say received broad and bipartisan support in the Senate.”

The bill establishes a permitting procedure by the state Department of Energy and Environment Protection for anyone who wishes to bottle more than 500,000 gallons a day after June 1, 2017.

“We love the bill. It’s exactly what we wanted,” said Lori Brown, executive director of the Connecticut League of Conservation Voters.

It requires DEEP to review as part of a state water plan the rates charged to water bottlers and rate-setting practices and structures. It also empowers the commissioner of public health to impose restrictions during droughts on a local, regional or statewide basis.

“I think it places legislation in place that ensures there will be some oversight,” said Rickford Kurtin of Bloomfield, one of the activists.

“I think it raises awareness and offers some protection of our resources,” said Paula Jones of Bloomfield.

But DiBella questioned why it singles out bottlers, instead of all large users. “It singles out one industry,” he said. “That sends a message that is just terrible.”

Opponents sounded the same theme on the Senate floor.

“I think we are weighing in on an area that is unnecessary in terms of the regulatory structure that is in place in this state and in this region and sends a message to business,” said Sen. John Fonfara, D-Hartford.

The MDC says its safe daily yield is 77 million gallons. From a high of 66 million gallons, daily demand now is about 50 million gallons, making water a commodity that DiBella says the MDC can responsibly sell to help pay debt service on about $2.4 billion for projects to meet clean-water standards for sewage.

“Here is a resource for which most of the country is envious of us,” Fonfara said. “It is a resource that is in excess capacity and there is nothing in the forecast that suggests that will change.”

Fonfara and two other Democrats who represent MDC towns, Tim Larson of East Hartford and Paul Doyle of Wethersfield, voted against the bill.

The other no votes were cast by Democrats Joan Hartley of Waterbury and Andrew Maynard of Stonington and Republicans Paul Formica of East Lyme, Michael McLachlan of Danbury, Clark Chapin of New Milford, Henri Martin of Bristol, Kevin Kane of Watertown, and Len Fasano of North Haven.