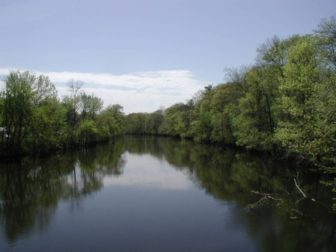 A view of the Farmington River

Washington – The Senate on Tuesday voted to give National Park Service protection to the lower Farmington River and Salmon Brook, Connecticut waterways that would be given a “wild and scenic river” designation.

The Lower Farmington River and Salmon Brook Wild and Scenic River Act was approved on a 97-0 vote as an amendment to the Energy Policy Modernization Act, an effort to modernize the nation’s energy policy that had stalled over funding to help Flint, Mich., with its lead-poisoned water system. The bill was revived after the money for Flint was removed. Salmon Brook is a tributary of the Farmington.

The amendment was sponsored by Sens. Chris Murphy and Richard Blumenthal. It’s the first time it’s won Senate approval, although Connecticut lawmakers have been trying to win final passage of the bill for several years.

Murphy initially introduced the legislation as a member of the U.S. House of Representatives, with then-Senator Joe Lieberman the sponsor in the Senate.

In this Congress, Reps. John Larson, D-1st District, and Elizabeth Esty, D-5th District, have sponsored the bill in the House, where it has received a hearing but no vote.

The lower Farmington River and the Salmon Brook flow through 10 Connecticut towns: Avon, Bloomfield, Burlington, Canton, East Granby, Farmington, Granby, Hartland, Simsbury, and Windsor. The upper portion of the river was given protected status in 1994.

“Now, we are closer than ever before to getting federal protection for Salmon Brook and the entire Farmington River, and I’ll be working with Senator Blumenthal, Congresswoman Esty and Congressman Larson to see this bill over the finish line, ” Murphy said.

Blumenthal said the Senate action “means we are one step closer to protecting a truly wild and scenic treasure that brings both economic and recreational benefits,” for the surrounding communities and the entire state.”

He said protection of the waterways will bring “profound economic and environmental benefits” to Connecticut because they are a source of energy and tourism.

With the designation as a “Wild and Scenic River,” the lower Farmington River and Salmon Brook could receive as much as $100,000 in federal funding to assist volunteers and officials with conservation efforts.