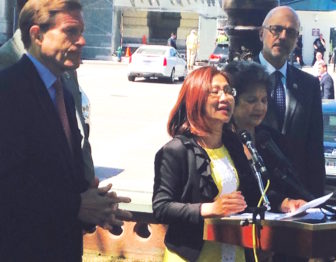 Shandra Woworuntu recounts her experiences as a victim of human trafficking.

Washington – After Shandra Woworuntu lost her job as a manager at a bank in Indonesia, she applied to an employment ad that she thought would offer her a new life in the United States, a place she called “the dream country.”

But instead of a job, she says, she was ensnared by sex traffickers who sold her in New York and Connecticut.

“They took me up and down I-95. I never knew where I was,” Woworuntu said.

On Wednesday, Sen Richard Blumenthal, D-Conn., and Rep. Jim Himes, D-5th District, introduced bills in the House and Senate as part of a bipartisan group of sponsor aimed at combatting human trafficking in foreign workers, like Woworuntu, who come to the United States on temporary worker visas – and with few protections from exploitation.

The Visa Transparency Anti-Trafficking Act would create a uniform system that could be used by all agencies in charge of issuing visas and policing human trafficking, including the FBI, the Department of Health and Human Services and  U.S. Immigration and Customs Enforcement (ICE.)

The legislation would also make information on visa sponsors – the people who are recruiting foreign workers – available to the public, lawmakers and non-profit groups combating sex trafficking with the hopes it will bolster their efforts.

More than a million foreign workers come to the United States every year on temporary worker visas.

“Currently the government makes only a very small amount of the data it collects available to the public,” he said. “This lets human traffickers operate with little fear of detection and allows thousands of people to be exploited.”

Blumenthal said the legislation would allow watchdog groups who discover and report a human trafficking ring to know where their victims came from and who recruited them.

“Ninety-nine percent thought they were responding to legitimate job offers,” she said.

Himes said he was unaware of the extent of the problem until he was alerted to it by a neighbor in Greenwich, Cathleen Caron, the head of the Global Workers Justice Alliance.

“It is a massive indictment when you are talking about enslaving the most vulnerable people on our planet,” Himes said.

Woworuntu applied for a temporary job at a Chicago hotel in 2001, but never got to the city.

Instead, when she landed in New York City, her “employer” seized her money and passport and told her she owed $30,000 that she would pay off by working in the sex trade.

She said she tried to escape and went to the police and the Indonesian consular office in New York. But nobody helped her. Eventually someone helped her connect with the FBI.

“Finally some of my traffickers are behind bars,” she said.