Connecticut Senate debates, for a while, a $12 minimum wage 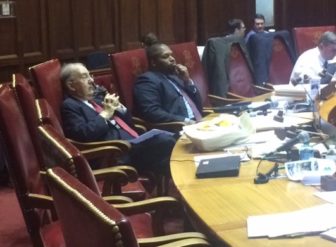 Sens. Martin M. Looney and Gary Winfield lean back as the GOP makes clear an intention to filibuster.

The leader of the Connecticut Senate introduced a surprise measure Thursday to raise the hourly minimum wage to $12 by Jan. 1, 2020, only to retreat in the face of an immediate Republican filibuster and a cool reception by the House of Representatives.

Debate was suspended after three hours as Republicans made clear they were prepared to talk well into Friday.

“It was obvious it was taking longer than we anticipated,” said Senate President Pro Tem Martin M. Looney, D-New Haven, who sponsored the measure with three other Democrats. “In addition to the filibuster, the Republicans had also prepared several amendments that would have taken extensive time to debate. I think they had a right-to-work amendment prepared.”

“It’s a possibility for tonight,” Looney said before 6 p.m.

About 15 minutes later, the measure was introduced on the Senate floor by Sen. Marilyn Moore, D-Bridgeport, opening a minimum wage debate that no one expected this session. House Democratic leaders were among those unaware of the Senate’s plans.

“It caught me by surprise. I didn’t realize this was something that was coming out. I think we all have to talk to each other to kind of know what the plan is or what the agenda is,” said House Speaker J. Brendan Sharkey, D-Hamden. “It’s not that I’m necessarily against it; I just didn’t realize it was happening.”

Senate Minority Leader Len Fasano, R-North Haven, said he saw the debate as an exercise in politics designed to appeal to the Democratic base. He noted that Moore, who was assigned to take the lead for the Democrats during the debate, faces a Democratic primary.

Republicans signaled their displeasure by immediately launching a filibuster. One after another, the GOP senators rose to register there opposition, then kill time with memories of their own minimum wage jobs. Fasano said he expected the debate to continue overnight – a pointed message to the Democrats.

“We’re saying this is a waste of time,” Fasano said. “This is not going to get called in the House.”

Looney abruptly pulled the plug on debate about three hours after it began, and the Senate Democrats filed into their caucus room. Looney said he would not attempt passage without a deal with the Republicans to limit debate and agreement with House Democrats on the bill’s substance. 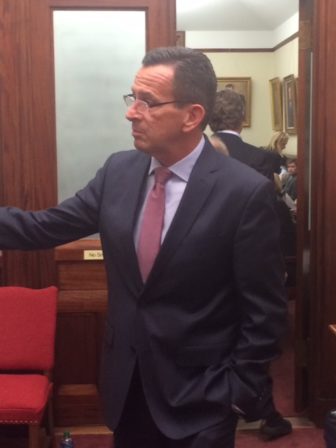 The session ends at midnight Wednesday.

Two years ago, Connecticut became the first state in the nation to pass a law setting a minimum wage at $10.10, drawing President Obama to New Britain to applaud the effort to reach a goal he had set for a resistant Congress.

Malloy has not called for a minimum wage increase this year. His chief of staff, Brian Durand, said he was informed only recently that Looney was considering proposing an increase, but the governor’s staff has been exclusively focused on budget preparations.

Passage of the $10.10 standard in 2014 established competing campaign narratives likely to echo again this year, when all 151 House and 36 Senate seats are up for election: Democrats predicted two years ago their votes would lift thousands from poverty, while Republicans warned of job losses.

The political allure of $10.10 faded quickly.

Hillary Clinton, the front runner for the Democratic presidential nomination backs a federal minimum wage of $12, while her rival, Bernie Sanders, says the wage should be $15 – a standard already reached in New York and California.

California Gov. Jerry Brown bowed to pressure from a national “Fight for 15” campaign earlier this year and dropped his reservations about the impact of a $15 minimum on the economy. On April 4, he signed into law a bill that raised the minimum to $15 in 2022. The bill allows him to postpone the increase in case of an economic downturn.

On Thursday, the minimum wage amendment co-sponsored by Looney, Moore, and Sens. Cathy Osten of Sprague and Ed Gomes of Bridgeport was attached to the so-called “Wal-Mart bill.” It is a measure that would recoup the cost of state benefits collected by low-wage workers at major companies that pay less than $15

The original legislation was gutted, leaving only the minimum wage provision.

Sen. Rob C. Kane, R-Watertown, complained that the increase was proposed without a public hearing or a chance to explore the impact on the Connecticut economy.

Kane asked Moore, the co-chair of the Human Services Committee, what rationale was used to set the specific hourly rate increases proposed in the bill.

“This is in line with the increases of the past three years,” Moore said. “It’s close to what we’ve done in the past.”

Moore told the Senate she recently took a low-wage job for one month to understand the experience many minimum-wage earners face. She said, “I can give you my own testimony, that I could never have survived if I had a family.”