As Congress balks, Puerto Rico on brink of financial meltdown 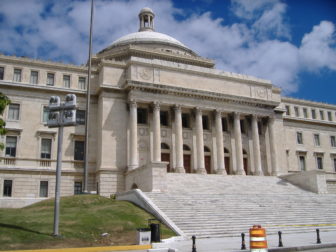 The Puerto Rican legislature’s headquarters in San Juan. It is also known as the Palace of Laws.

Washington — As the hours tick down toward Puerto Rico’s default on a massive debt payment Sunday, Congress has so far rejected solutions offered by Connecticut lawmakers and some Republican leaders to save the commonwealth from economic ruin.

GOP leaders say Congress will miss a May 1 deadline to help Puerto Rico with a  $422 million debt repayment that’s due that day. An even bigger crisis could come on July 1, when a $2 billion payment is due, raising the specter of default on some of the territory’s general obligation bonds.

But House conservatives say they are worried the bill, which would institute a financial oversight board over Puerto Rico and restructure its debt, could stifle the bond market. It also has been opposed by the hedge fund industry.

“Given the magnitude of the problem and length of time that has passed without action, I was extremely disappointed to learn…that Congress will still not have addressed the crisis in Puerto Rico by May 1st,” said Rep. John Larson, D-1st District. “Speaker [Paul] Ryan has consistently pledged that he will work to try to address these issues, and I take him at his word.

Conneticut’s Latino and Puerto Rican Affairs Commission and a number of state Latino advocacy groups also had urged Ryan to meet the deadline.

Without restructuring, Puerto Rico’s constitution requires that payments to creditors, such as bondholders, receive priority over those to pensioners. House Republicans wrote their first draft of the bill to maintain the order of creditor priority, but unions and Democrats are pushing back, saying the bill must include language placing recipients of Puerto Rico’s government pensions ahead of any other creditors.

Meanwhile a group called the Center for Individual Freedom is running ads pressuring lawmakers to reject the Puerto Rico bill. The ads say the legislation amounts to a financial bailout, even though the bill provides no direct financial aid.

There’s opposition to provisions in the bill from the island’s government and Latino advocacy groups like the Hispanic Federation, which has a presence in Connecticut.

They say the proposed oversight board would strip Puerto Rico of its sovereignty.

“We believe this section undermines local democracy in Puerto Rico, and so we oppose this, the Hispanic Federation said.

The federation and many Democrats are pushing to allow Puerto Rico to restructure all of its debt.

Congress has rejected, for now, a proposal sponsored by Sen. Richard Blumenthal, D-Conn., and backed by other Connecticut lawmakers who want to extend Chapter 9 bankruptcy protection to Puerto Rico. Unlike the 50 states, Puerto Rico is excluded from Chapter 9 of the U.S. bankruptcy code, which allows municipal governments and public agencies, though not the states themselves, to restructure their debt during a crisis.

Opponents of Blumenthal’s bill said it would not be fair to bondholders who invested in the island with the understanding it could not file for bankruptcy.

Blumenthal, however, said his bill has not been rejected yet by a Senate vote “and now that the situation is so dangerous, perhaps there will be action.” 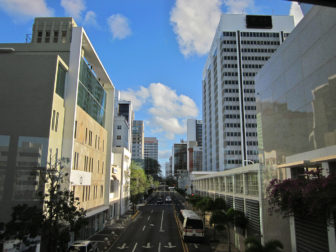 With teachers, police officers and other government employees missing paychecks, and doctors fleeing the island because the government-funded medical system has collapsed, there’s been an exodus from Puerto Rico.

The financial collapse has led to an unprecedented flight of islanders to the U.S. mainland, mostly to Florida and New York, but also to Connecticut, said Ingrid Alvarez, Connecticut state director of the Hispanic Federation.

Connecticut has the highest per capita Puerto Rican population of any state. The latest U.S. census figures show that more than 7 percent of the state’s population identifies itself as Puerto Rican.

“There are stories of people in our community who are receiving nieces, nephews and cousins,” Alvarez said. “They are U.S. citizens; where else are they going to go?”

Although healthy population growth was once the norm in Puerto Rico, a recent Pew Research Center report said the island has had a 9 percent decline in the population from 2000 to 2015, with most of the loss in the last five years.

While the senator said he welcomes new islanders to Connecticut, he’s dismayed that the rapid depopulation of  Puerto Rico strips it of needed workers and batters the economy.

Other proposals have been floated to help Puerto Rico, including amending the federal Jones Act, which requires foreign ships carrying  cargo bound for the island to first unload that cargo on the U.S. mainland. The goods are then reloaded on U.S. ships before they are sent to Puerto Rico.

This results in higher shipping costs and higher prices for many goods. There are optimistic projections that exempting Puerto Rico from the Jones Act would generate billions of dollars in savings that could be used to solve the debt crisis.

“This is in no way a solution,” Blumenthal said. “It would provide little if any relief and has political obstacles.”

Lawmakers who represent U.S. port cities are firmly opposed to the plan.

Blumenthal – and other advocates of aid to Puerto Rico – hope Congress regroups on the Puerto Rico crisis before a July 1 default.