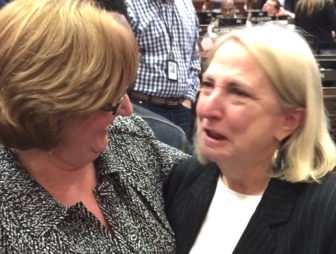 Retiring Rep. Roberta Willis, right, gets a hug from Rep. Cathy Abercrombie after the House voted to rename a scholarship in her honor.

The state House of Representatives tipped its collective hat Saturday to Rep. Roberta B. Willis, D-Salisbury, voting to rename a scholarship program after the retiring lawmaker.

The House unanimously approved a measure that renames the Governor’s Scholarship Program in Willis’ honor. It now heads to the Senate.

The longtime co-chair of the Higher Education and Employment Advancement Committee, Willis is not seeking re-election this November after 16 years in the General Assembly.

“For as long as I have been here, Roberta has fought for kids to have access to higher education and she’s done so with logic and grace,” Rep. Toni E. Walker, D-New Haven, said.

“It was suitable and fitting,” House Majority Leader Joe Aresimowicz, D-Berlin, said. “She’s been a tireless advocate for higher education in this state.”

A tearful Willis tried to deflect her colleagues’ praise amid hugs after the vote.

“I’m really speechless,” she said, adding that when it comes to fighting to make higher education accessible to all, “I don’t feel like it’s just me. It’s everybody.”