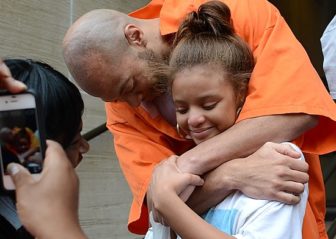 Sean Adams, free after 17 years, hugs the daughter born after his arrest.

The House of Representatives voted 85 to 63 Tuesday for final passage of a bill restricting wrongful incarceration awards and requiring legislative review of any award in excess of $20,000 from the office of the claims commissioner, which made a controversial $16.8 million award to four former gang members in January.

The bill creates a formula for wrongful incarceration awards: damages should be equal to or up to twice the median household income for the state, with the commissioner retaining limited discretion to increase or decrease the award based on evidence.

Under current law, the legislature reviews all awards greater than $20,000 with the exception of wrongful incarceration awards, which have run into the millions of dollars. The first three such awards went to men whose innocence was proven by DNA evidence that exonerated them and convicted someone else.

But the case of the Island Brothers – Carlos Ashe, Darcus Henry, Sean Adams and Johnny Johnson, convicted in an ambush of rival New Haven gang members in 1996 that left Smith dead and two others wounded – presented harder questions about what the state owes former convicts whose freedom comes from a finding of prosecutorial misconduct or other trial errors, not proof of actual innocence.

The current law says claimants are entitled to damages for wrongful incarceration only if a conviction was vacated or reversed on grounds of innocence or consistent with innocence.”

The bill expands the eligibility criteria by allowing compensation when the ground for dismissal is malfeasance or serious misconduct by a state officer, agent, employee, or official.

J. Paul Vance Jr. resigned as claims commissioner after the controversy in the New Haven case. He said he applied the facts to a compensation law that requires claimants to show by a preponderance of the evidence they were released for reasons of actual innocence or grounds “consistent with innocence.”

The bill passed the House on largely partisan lines. The Senate passed it unanimously.