After a tough term in Hartford, a spate of legislative retirements 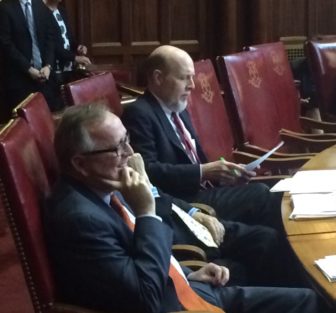 One is 32, recently married and looking for a job that pays more than the $28,000 salary of a Connecticut state legislator. Another is 81, ready to retire from the battles in Hartford. Others are weary of having to explain a chronic fiscal crisis.

For reasons personal and political, at least 20 members of the Connecticut General Assembly – two senators and 18 representatives, a mix of newcomers and veterans – marked the end of their last regular session Wednesday.

There are 10 Republicans and eight Democrats from the House and one from each party in the Senate who have announced they will not seek re-election this fall to the General Assembly. Others have not announced re-election plans.

The House and Senate set side partisan politics for tributes and farewells Wednesday, a day that ended without the normal deadline rush. Legislative leaders announced lawmakers will return next week in special session to pass a budget, and Gov. Dannel P. Malloy passed up his opportunity to address a joint session of the legislature at midnight.

The departure of Sen. Andrew Maynard, D-Stonington, who was re-elected without campaigning in 2014 after sustaining a traumatic brain injury in a fall, is a concession to his struggles to fully regain his ability to speak.

“I don’t like goodbyes at all,” Sen. Catherine A. Osten, D-Sprague, told Maynard, whose district is adjacent to hers. “I look on you as more than a colleague, but as a mentor. You have shown me how to act with grace and courage. I will miss you immensely. You have meant so much to me.” 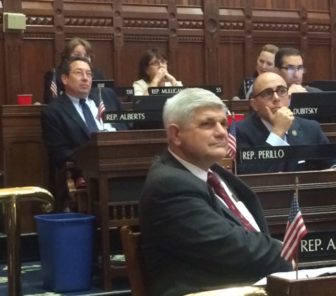 Maynard rose for his first floor speech since his accident after senators from both parties took turns praising him for his diligence and humor.

Not all those departing one chamber are necessarily saying good-bye to the General Assembly. Rep. Craig A. Miner, R-Litchfield, is not running for another term in the House, but he hopes to succeed his carpool friend, Sen. Clark J. Chapin, R-New Milford, who is the other senator not running.

Rep. John T. Shaban, R-Redding, also is taking a shot at higher office by seeking the GOP nomination for Congress in the 4th District.

But others are retiring from politics, worn from coping with a chronic fiscal crisis. 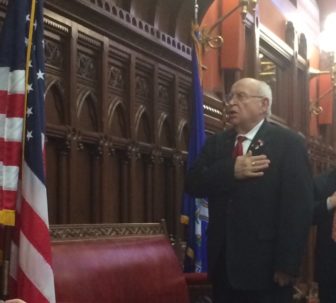 Rep. Al Adinolfi, 81, who is retiring, led the chamber in the Pledge of Allegiance on the final day of the regular session.

“It’s getting old,” said Rep. Roberta B. Willis, D-Salisbury, who is leaving after 16 years. “It’s increasingly difficult to try to explain it at home to people.”

Rep. Mike Alberts, R-Woodstock, who was unopposed in 2014 after winning his first election 10 years earlier by just 48 votes, said he was leaving for personal and professional reasons: The divorced lawmaker is getting remarried, and he is a senior executive in a community bank, a job hard to balance with his legislative duties.

Rep. David A. Kiner, D-Enfield, whose father was a state legislator, said he, too, wants to spend more time on career and marriage. Kiner, 32, recently celebrated his first wedding anniversary.

“I think it’s the right time to move on,” said Kiner, who was elected in 2010. “I love this place. I love this job. I love my constituents.” But balancing a career with the General Assembly, a part-time institution that can require full-time attention, is too difficult, he said.

Rep. Paul Brycki, D-Griswold, and Rep. Gayle J. Mulligan, R-Hebron, are leaving after a single term. Mulligan and her husband are building a house outside her district. Brycki said he was having trouble balancing legislative duties with a job at home.

“As a part-time job, it takes full-time attention,” he said. 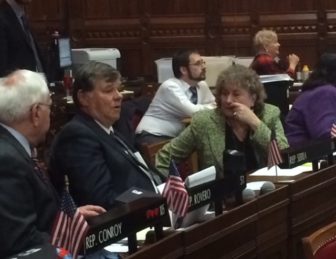 Reps. Paul Brycki and Claire Janowski. Brycki is quitting after one term, Janowski after eight.

“It was a tough one,” she said of her decision. “I’m still ambivalent about the decision.”

Janowski said the continuing fiscal crisis has made it more difficult to accomplish things, such as bringing home the financial assistance that helped finance the conversion of old mills in her district to housing.

Rep. Mary G. Fritz, D-Wallingford, who is the third-longest-serving member of the House, has been in ill health and was absent Wednesday.

But she got applause and laughter from both sides of the aisle in the House with a gibe at their common enemy, the Senate, in a video played in the House: “As you know, we do the work — and the Senate takes it up.”

House Departures
Ten Republicans and eight Democrats have announced their retirements from the House. In the Senate, Democrat Andrew Maynard and Republican Clark Chapin are not seeking another term.