Malloy to veto retirement security bill if revisions aren’t made 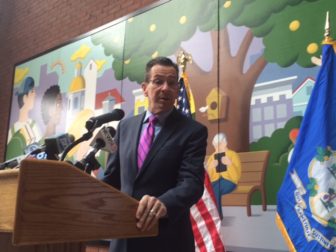 Gov. Dannel P. Malloy said Friday he would veto a heavily lobbied bill establishing a private-sector retirement program overseen by a quasi-public authority unless revisions are made in special session next week.

The bill won final passage in the Senate on a tie vote broken by Lt. Gov. Nancy Wyman, which put the Malloy administration’s stamp on the measure. But passage came with an understanding that revisions would come in a separate bill that never came to a vote before the session ended at midnight Wednesday.

The bill would create a quasi-public system overseen by the Connecticut Retirement Security Authority for automatically enrolling private-sector employees who lack access to payroll deductions for a retirement savings plan into the new program, unless they opt out.

The payroll deductions would go into a Roth IRA overseen by the new authority. One of the revisions demanded by Malloy would require the authority to open the system to multiple vendors. The bill now would have the authority hire a single vendor to manage the fund.

Other revisions would cap fees and alter how the authority’s board members are appointed and the rules for conducting meetings. The changes sought by Malloy would have the authority’s makeup and rules conform with other quasi-public authorities.

“I would veto that if the changes that need to be made are not made,” Malloy said.

John Erlingheuser of AARP, one of the bill’s strongest backers, said the revisions were acceptable to proponents and the financial securities industry, which opposed the new program as a government intrusion into their business.

The bill applies to private-sector employers that do not offer a 401(k) or other payroll deduction retirement option and have at least five workers who earned at least $5,000 in the previous year. It covers all of their employees who are 19 and older and have worked for the employer for at least 120 days, although workers would be allowed to opt out.

There are about 600,000 workers in Connecticut with no access to a retirement savings plan at work. They are free to open an IRA in the private market, but proponents of the new program say payroll deductions are the most effective way to increase savings rates.