The federal government last week moved to regulate the booming e-cigarette industry, including banning electronic cigarette sales to minors, and it required all tobacco products to undergo government review, even many already on the market. E-cigarettes, along with similarly categorized devices such as vaporizers and vape pens, will be regulated as tobacco products because they use a liquid containing nicotine.

Here are some questions and answers about how the Food and Drug Administration’s new rule will affect consumers:

Q: What does the FDA’s rule do?

The new rule implements the Family Smoking Prevention and Tobacco Control Act passed by Congress in 2009.

That law bans sale of all types of tobacco products to people under 18, requires photo identification for everyone under 26 who buys such products, prohibits their sale in vending machines (except those in an adult-only facility) and prohibits the distribution of free samples. The law also requires all products carry warnings that they have nicotine, an addictive chemical. Virtually all e-cigarettes sold in the U.S., and any new tobacco products, will have to seek marketing authorization from the FDA, which will decide if they meet the law’s public health standards and can be sold. Products sold before Feb. 15, 2007, are exempt.

Q: When does the new rule take effect?

The ban on the sale to minors takes effect Aug. 8. That will primarily affect only two states – Michigan and Pennsylvania. The other 48 states already ban sales of e-cigarettes to people under 18. Coincidentally, California Gov. Jerry Brown this week signed legislation in his state that will raise the legal smoking age from 18 to 21, prohibit the use of e-cigarettes in many public places, and ban the marketing of e-cigarettes to children. The law takes effect June 9, making California the second state to raise the legal smoking age to 21 following Hawaii.

As for the FDA rule, on Aug. 8 the prohibitions on distributing free samples and vending machine sales will also take effect, and retailers will be required to ask consumers to show photo identification. The federal government will take over enforcement of the prohibition on sale to minors and could fine retailers or stop them from selling tobacco products.

The new warning label requirements will take effect in May 2018.

But products already on the market could remain so for up to three more years. That’s because manufacturers have two years to submit product applications to the FDA for review, and the FDA has an additional year to finish the evaluation. After the review, the agency could grant manufacturers authority to keep selling their products or act to limit their sale. The FDA could decide to restrict the marketing of certain products, even those described as “light,” “low” or “mild” risk.

Q: Why is the FDA taking this action?

A: While the rate of cigarette smoking has declined in the past decade among adults and youth, the use of other tobacco products, including e-cigarettes, continues to climb. A survey supported by the FDA and Centers for Disease Control and Prevention shows that in 2014 one in four high school students and one in 13 middle school students reported being tobacco users, meaning they consumed one or more tobacco products in the previous 30 days. That’s 4.6 million youths. About 2.2 million also reported being current users of two or more types of tobacco products.

The survey also indicates current e-cigarette use among high school students surged from 1.5 percent in 2011 to 13.4 percent in 2014. Meanwhile, hookah use has risen significantly from 4.1 percent to 7.2 percent during the same time. 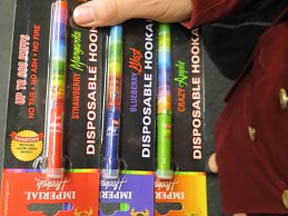 A selection of fruit-flavored e-cigarettes

Q: What could be next?

A: Consumer advocates have long wanted the FDA to ban flavored e-cigarettes and cigars but neither is done through the new rule. But according to the rule, the FDA intends to target flavored cigars for regulation next.

Q: If Congress passed a law in 2009, why has it taken six years to get a rule implementing it?

A: In December 2010, the U.S. Court of Appeals ruled the FDA could not regulate electronic cigarettes as a drug or a device but only as a tobacco product. That meant the government could oversee their marketing but not restrict their sale, except to minors. It’s unclear why the FDA needed more than five additional years to issue a final rule.

Q: How dangerous are e-cigarettes?

A: Research has not provided a full answer yet.

The e-cigarette consists of a battery, a heating element and a cartridge that contains a liquid suspension with nicotine. When a user inhales from the cartridge, the liquid is heated and a vapor is emitted. The nicotine is obtained from tobacco plants.

In 2009, an FDA test on a small number of e-cigarette samples found “detectable levels of known carcinogens and toxic chemicals to which users could potentially be exposed.” However, in 2010, a court ruled that “the FDA had cited no evidence to show that electronic cigarettes harmed anyone.”

This story was originally published by Kaiser Health News, a national health policy news service that is part of the nonpartisan Henry J. Kaiser Family Foundation.