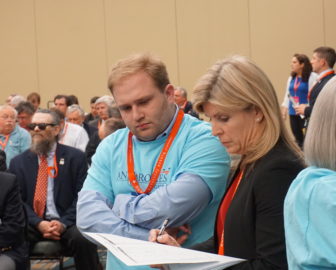 Connecticut Republicans overwhelmingly endorsed Clay Cope, the first selectman of rural Sherman and one of the GOP’s few openly gay elected officials, as their congressional candidate Monday in the 5th District. Daria Novak won a narrow contest in the 2nd District, but could face a primary from Ann Brookes.

The 2nd and the 5th, the sprawling districts to the east and west of the densely populated I-91 and I-95 corridor running from Hartford to New Haven to Bridgeport, were the only contested races as Matthew Corey, Angel Cadena Jr. and John T. Shaban were nominated by acclamation in the 1st, 3rd and 4th districts.

Novak edged Brookes in the 2nd, 139 to 134. Brookes had pledged not to primary, but was reconsidering after the close margin and what she said was encouragement from delegates. 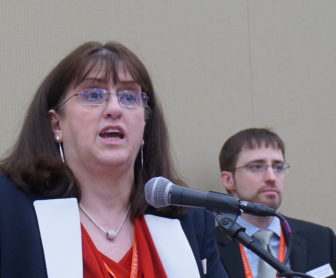 Daria Novak accepts the endorsement in the 2nd District.

“Joe Courtney is beatable, period,” Novak said, portraying her campaign as part of a larger political battle. “I think that we have an opportunity that’s presenting itself this year, not just in Congress, not just in the Senate but at the presidential level, too, where we as a nation, we can change the course of history and move forward together against he forces that want to destroy us.”

Brookes, a tax attorney, was a late entrant into the race, announcing her candidacy in April. Novak, a conservative radio talk show host who has run twice before for the 2nd District nomination, had the GOP field to herself for nearly six months, but many backers of Brookes expected her to win.

In the 5th, Cope will face U.S. Rep. Elizabeth Esty, D-5th District, who won the open seat in 2012, succeeding Chris Murphy, who had unseated Republican Nancy Johnson in 2006. His GOP rival, Bill Stevens, fell far short of the 15 percent of the delegate vote necessary to qualify for a primary.

“This is huge, and I think this bodes very well for the future against Elizabeth Esty,” Cope said.

Cope is a native of Texas who settled in Sherman after moving to the Northeast to pursue a career in the fashion industry. He said the best issue to use against Esty is “community involvement,” what he called her lack of visibility in the district’s 41 cities and towns.

“It’s something I feel Elizabeth has let us down,” Cope said. “I’ve never met the woman on my turf.”

Cope downplayed being a groundbreaking candidate as a gay man winning the Republican nomination for congressional office in Connecticut.

Endorsed Congressional Candidates
All five Democratic incumbents are seeking re-election. The GOP lineup seems set with the exception of a potential GOP primary in the 2nd.