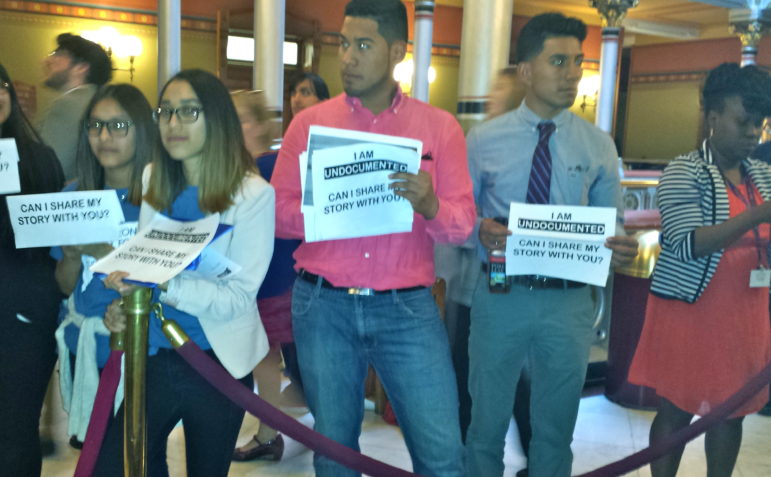 Undocumented immigrants may have failed to persuade enough state legislators in the just-ended session to make them eligible for state-funded financial aid, but on Tuesday a national nonprofit stepped up to help hundreds of undocumented students attend Eastern Connecticut State University.

TheDream.US, a national nonprofit, announced Tuesday that it plans to spend up to $11.5 million annually to provide scholarships for 700 students to attend Eastern or Delaware State University.

The announcement was made by officials of the nonprofit during a visit to ECSU in Willimantic and celebrated by Gov. Dannel P. Malloy and Mark Ojakian, the president of the Connecticut State Colleges and Universities system, which includes Eastern.

“Education is an American value; we should help every student who has worked hard,” Graham said in a statement. “We are proud to partner with Eastern Connecticut State University and Delaware State University, with the incredible leadership of Gov. Malloy and Gov. Markell, to give deserving students the opportunity for an affordable college education.”

“Our state stands to benefit from welcoming DREAMers to our communities and to our schools,” said Malloy, a Democrat who has proposed opening scholarships to these students in the past.

Ojakian has been backing a push from so-called “Dreamers” to open to undocumented students the nearly $70 million pool of financial aid that the system provides to needy students. However, legislation to do that failed to gather enough support in the Democrat-controlled state House of Representatives in the session that ended last week.

“We are disappointed this legislation did not pass this session. Fundamentally, this was an issue about equality and justice as our students were paying into a fund they could not access,” said Ojakian.

The scholarships announced Tuesday will begin providing financial aid to those who graduated with a 2.8 GPA and qualify for Deferred Action for Childhood Arrivals (DACA), an immigration policy that exempts from deportation certain immigrants who arrived in the country before 2007 and before they were 16 years old. In Connecticut, there are 7,252 DACA residents, and nationwide there are 509,203.

In a statement, CT Students for a Dream – a coalition of immigrant residents, business leaders and community leaders – said it “cautiously applauds this effort to make college a reality for more undocumented students.”

“We applaud the governor’s invitation to undocumented students whose dreams of attending college are held hostage in their states to come study in Connecticut. While we are ecstatic to hear that many in our community will have the opportunity to access this program and have their dreams of attending college turn into reality, there is a lot more to be done,” said Lucas Codognolla, a leader of the organization.