Washington – A  Senate defense panel has been far less generous to Connecticut defense programs than it’s counterpart in the House, which had boosted the number of F-35 Joint Strike Fighter planes and doubled the number of Black Hawk helicopters the Pentagon had asked for.

The House also doubled the number of Sikorsky-made Black Hawks from 36, which the Pentagon requested, to 72. But the Senate defense bill would not.

The House was able to authorize spending on more F-35s, helicopters and other defense programs because it shifted money from the Overseas Contingency Operations (OCO) account, which is used for military operations overseas, to the base defense budget.

A pushback from the White House and some lawmakers is expected.

Rep. Joe Courtney, D-2nd District, who supports the beefing up of Connecticut-based defense programs – he was awarded the U.S. Navy League’s annual ‘Sea Service Award’ this week for his efforts to promote shipbuilding – said he was troubled by the tactic.

“Instead of addressing the budgetary needs of the country, both military and non-military, in a straightforward way, the bill once again reflects a work-around maneuver that avoids the compromise and action we know is needed,” said Courtney, a member of the House Armed Services Committee.

Citing military officials who have testified in Congress, Courtney said “the lack of action on a long-term budget compromise will greatly impact our ability to build the ships, aircraft and other capabilities we know we will urgently need in the coming decades.”

Authorization bills are the first steps in the military funding process. Differences between the House and Senate bills are negotiated after each chamber approves its bill

Actual spending must be approved in separate appropriations bills by the House and Senate.

The Senate defense authorization bill also would require the Navy to report to Congress on how it will transition the Ohio-class replacement submarine program, for which Electric Boat in Groton is the prime contractor, from cost-plus to fixed-price contracts “as soon as possible.” The Ohio-class replacement will be a new fleet of 12 nuclear-powered ballistic missile submarines to replace the aging Ohio-class subs that were also built by Electric Boat.

The Senate bill did not however, fund the National Sea-Based Deterrence Fund, set up by Congress to pay for the pricey Ohio-class replacement submarines outside of the Navy’s shipbuilding budget. The House bill contained $773 million for the fund, an attempt at starting to collect money for a sub that’s expected to cost $6 billion apiece.

Like the House bill, the Senate bill would authorize $5 billion to continue to build two Virginia-class attack submarines in fiscal year 2017. Those submarines are also built by Electric Boat.

But, besides holding to the number of F-35s requested by the Pentagon – five fewer than last year – the Senate bill would disband the F-35 Joint Program Office at the Pentagon, leaving oversight responsibilities for the F-35s to the individual services. The F-35 is built in three versions, known as the F-35A, F-35B and F-35C, for the Air Force, Navy and Marines.

“Despite aspirations for a joint aircraft, the F-35A, F-35B, and F-35C are essentially three distinct aircraft, with significantly different missions and capability requirements,” said a Senate Armed Services Committee release. “Devolving this program to the services will help ensure the proper alignment of responsibility and accountability the F-35 program needs and has too often lacked.” 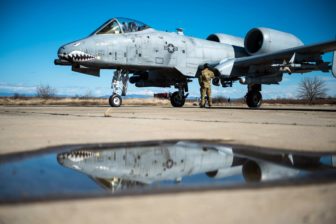 The Senate bill also would place $8 billion to make upgrades and fixes for the first block of F-35s into a separate account.

“Given the Department of Defense’s poor track record on upgrade programs like this one, a separate program will enable rigorous oversight by the Congress to protect taxpayers,” the Senate release said.

Sen. Richard Blumenthal, D-Conn., a member of the Senate Armed Services Committee, said the move could improve transparency, but otherwise would not affect the program.

“The money is the money, and as long as it is dedicate to the program, it’s still going to sustain and enhance the F-35 program,” he said.

While the Senate Armed Services Committee agreed to the Pentagon’s request for the new B-21 Long Range Strike Bomber, whose engines will be built by Pratt & Whitney, it would require the Defense Department to establish “a strict B-21 program baseline and cost control thresholds” and requires quarterly program performance reports to Congress and disclosure of the cost of the new plane’s engineering and manufacturing contracts. The Pentagon has declined to release this information, citing national security.

“This is a reform bill,” said Sen. John McCain, head of the Senate Armed Services Committee.

Like the House bill, the Senate bill prohibits the Pentagon from conducting another round of base closings, something the Obama administration has sought for years to reduce excess capacity at the nation’s military bases.

“This bill is a breakthrough budget; it adds to the president’s request for helicopters, and it advances submarine readiness,” Blumenthal said.

The bill is expected to be considered by the full Senate in about two weeks. Blumenthal said he’d seek to boost money for Connecticut projects during that debate.

“Sikorsky certainly has the capacity to produce far more helicopters, and they are needed,” he said.