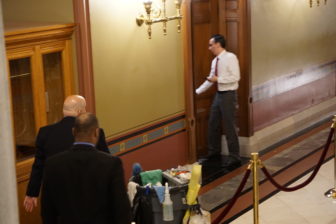 The governor’s chief of staff, Brian Durand, heads to his office for bad news from his counterpart in the Senate, Vinnie Mauro. Malloy aide Paul Mounds trails.

The Senate postponed a plan to adopt Gov. Dannel P. Malloy’s signature proposal to reform the bail and juvenile-justice systems after a tense day of negotiations Thursday over revisions aimed at bolstering Democratic support and blunting Republican opposition in an election year.

In a conference at midnight, the chiefs of staff for Malloy and the Senate and House Democratic leaders agreed that the House instead would make the first attempt to pass the bill Friday at the insistence of Senate President Pro Tem Martin Looney, D-New Haven.

Looney said he did not want to keep his members for all-night debate if passage in the House was uncertain. “We didn’t get the same level of assurance on this bill” from the House as was the case on the budget approved earlier Thursday by the Senate,” Looney said.

“An Act Concerning a Second Chance Society” would eliminate bail for most minor crimes and eventually place many defendants charged with other-than-major felonies under the jurisdiction of juvenile courts until age 21. It is Malloy’s second round of criminal justice reforms in two years.

Policy experts have closely watched Malloy’s latest effort, an attempt to raise the age of criminal responsibility based on neuroscience showing the portions of the brain governing impulse control and other executive functions do not mature until the mid-20s.

“This is irrefutable. People don’t fully mature until they are well into their 20s,” Malloy said Wednesday, on the eve of Thursday’s special session. “That’s the reality. That’s what the science tells us. This isn’t opinion. This is science. This is like, ‘The world is round.’ ”

In 2005, recent breakthroughs in the scientific understanding of the adolescent brain figured in the U.S. Supreme Court’s striking down the death penalty for juveniles. But Malloy is attempting to take the science further as a justification for expanding the reach of juvenile courts.

Senate Minority Leader Len Fasano, R-North Haven, who supports barring bail for low-level misdemeanors and is open to more modest changes in how young adults are treated in court, said the governor’s bail and juvenile justice reforms are too ambitious.

The administration rewrote the bill to reflect the concerns of prosecutors about the legislation and existing laws. Like the budget, it never came to a vote in the regular session that ended last week.

Under current law, it is nearly impossible to transfer 16- and 17-year-olds who commit serious violent crimes to adult court. Only Class A felonies, the most serious crimes, are automatically transferred, and judges can move other cases to adult court only if they conclude it is in the best interest of the defendant.

The revised legislation would automatically transfer all Class A and B felonies to adult court, with the exception of a larceny charge most often lodged in auto theft cases. Judges could transfer any juvenile to adult court in the interest of public safety.

“That’s one of the most important parts of the bill,” said Michael Lawlor, the governor’s criminal justice adviser.

After negotiations with the bail industry, the administration already had given up plans for broader bail reforms.

The administration struggled to address GOP concerns about the bill and reassure Democrats wary of being portrayed as weak on crime, a concern that grew more intense as Republicans filed 11 amendments, some crafted to put Democrats on record as opposed to curtailing the reach of the bill.

“If there is a 19-year-old who has sex with a 13-year-old, we’re going to treat them both as minors? I’m not sure that is appropriate,” Fasano said in an interview. “I think there are some crimes we need to hold the line on. And apparently the governor’s office and a majority of the Democrats don’t believe that’s true. I’m saying, ‘OK, let’s amend it. Stand up for what you think.’ We’ll stand up for what we think.”

His example, however, did not appear to reflect the revised bill. Sex with a minor under age of 15 is a Class B felony, so such a case would end up in adult court.

While the Senate debated and ultimately passed a budget for the fiscal year that begins July 1, Malloy twice called Fasano to discuss revisions. Fasano also visited Malloy twice in the governor’s office. But a compromise with the GOP eluded Malloy, a second-term Democratic governor. 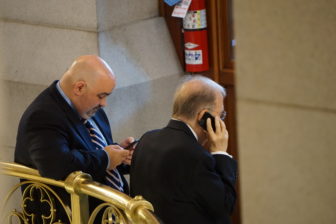 It was a night of phone calls and text messages for Sen. Martin M. Looney and his chief of staff, Vinnie Mauro.

At 9 p.m., Looney conceded he could not guarantee that his caucus, which has a 21-15 majority, could defeat all the amendments Fasano had prepared to narrow the scope of the bill. This was shared with the governor’s office, along with Looney’s uncertainty that the House could pass the bill.

Two hours later, Looney’s chief of staff, Vinnie Mauro, was summoned to the office of Brian Durand, the governor’s chief.  He and Paul Mounds, a Malloy aide, walked past the supply cart of a janitor working the overnight shift into Durand’s office. Maureen Magnan, their House Democratic counterpart, joined them 10 minutes later.

Magnan said after their meeting that the House Democrats believed they had the votes to pass Second Chance, depending on the availability of their members. The House hoped to vote on the bill after it gives final passage to the budget.

Under Malloy, Connecticut has decriminalized marijuana possession, repealed mandatory minimum sentences for drug possession and implemented a previously adopted law raising the age of criminal responsibility from 16 to 18. Connecticut was a laggard in raising the age to 18, despite a growing consensus that the brain and its capacity for mature decision-making evolves past the teen years, perhaps to as old as age 25.

Last year, Malloy joined some of the nation’s most conservative governors by winning passage of legislation intended to lower incarceration rates for non-violent crime, a reversal of the get-tough-on-crime trend that produced an explosion in prison populations.

Malloy promised then that what he called his “Second Chance Society” bill, which eliminates prison as a punishment for many drug possession crimes, was a first step in addressing fiscal and social costs of incarceration, a mission supported by fiscal conservatives and social liberals.