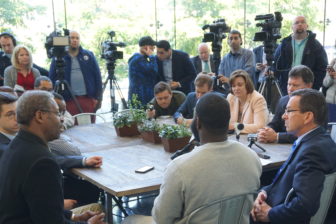 The administration staged a roundtable discussion at the Hartford Public Library, putting Malloy before five television cameras to talk about a plan that he says will spare the poor from pre-trial incarceration on low bail and young adults from permanent criminal records.

“Why do you think I’m doing this event? I’m working,” Malloy said. “We don’t win every battle we’re in, but I’m all in on this, because I know it’s life changing. And I know it’s life-changing for disproportionately black and Hispanic people.”

Malloy’s measure would ban bail for most misdemeanors, freeing hundreds of prisoners being held pre-trial for an inability to afford even low bail. It would extend the protections of juvenile court to defendants up to age 21 for other-than-major felonies, saving them from an adult criminal record that would follow them forever.

Malloy sat with clergy, lawmakers, ex-offenders and others at the Hartford Public Library in a cafe run by a non-profit that hires former inmates.

“It ought to be a no brainer in the legislature to push this thing down the road, and I wish we’d do this now. It just makes sense to do it,” said the Rev. Stephen W. Camp of Faith Congregational Church in Hartford. “I’m encouraged by your effort, but how do we get your colleagues to four-square come on board?”

Malloy told him that not every member of the legislature understands the urgency of a problem that disproportionately affects minorities and urban poor.

“If the people in non-urban areas understood the pressure that people in urban areas, and let’s be honest in communities of color [felt], they would be more open to these concepts,” Malloy said.

Crime is at a 48-year low in Connecticut, and all evidence is that earlier reforms that decriminalized simple possession of small amounts of marijuana and raised the age of criminal responsibility from 16 to 18 are contributing to that drop.

“We’re making progress,” he said. “Now, how do we make more progress, I think, is the real question.”

Hours later, Sharkey told reporters in his office that he supports the governor’s bill, “An Act Concerning a Second Chance Society,” but passage remains a challenge.

Sharkey said the Senate is evenly divided on the measure, 18 to 18, probably requiring Lt. Gov. Nancy Wyman to cast a tie-breaking vote. His sense is that the administration has work to do in the House to overcome concerns that the reforms carry risk in an election year.

“I think it’s a function of folks making up their own mind based upon what they believe is the right thing to do in terms of this vote,” Sharkey said. “That’s a lift for the administration, certainly.”

Sharkey said he is considering a series of workshops for lawmakers on the bill, which has been amended to address the concerns of prosecutors.

“I have told the governor that I believe what is being proposed is in the general sense a good thing, and that I am trying to facilitate the governor’s efforts on this, and I will continue to do so,” Sharkey said. “In the end, it’s like everything, it’s a question of whether there are the votes to pass it.”

The General Assembly failed to take up the bill in the regular session that ended May 4, and the Senate and House each postponed votes on the bill in special session late last week.

Sharkey also postponed a vote the bond package – borrowing on projects of intense interest to legislators throughout the state. Legislators will have to return to Hartford before the fiscal year ends next month, giving him and Malloy a chance to pass Second Chance.

“The Second Chance bill did not have the votes to pass when it came up in the regular session and again in the special session,” Klarides said. “We had important business to finish, namely the school construction bill that many towns and cities are counting on. To hold that hostage in order to get your own deeply flawed, pet legislation approved that lacks support, is unconscionable.”

Devon Puglia, a spokesman for Malloy, said it was Klarides playing politics, not Malloy.