DNC delegates picked with eye toward diversity and loyalty

Supporters of rival delegate slates at the Bernie Sanders’ caucus in Mansfield.

Mansfield – A postscript to Connecticut’s Democratic presidential primary played out Tuesday in caucuses to select 36 delegates to the Democratic National Convention on the basis of gender, race, sexual orientation and pledges of loyalty to Hillary Clinton or Bernie Sanders.

Clinton narrowly won the April 26 primary, but the Sanders’ forces demonstrated Tuesday that they still can generate passion, drawing far more Democrats to their five congressional district caucuses than Clinton did to hers.

Sanders delegate slates assembled and screened at a statewide meeting weeks ago won in all five congressional districts, with the closest race here in the 2nd Congressional District, where about 300 Democrats waited in line at the Mansfield Middle School for a chance to pick among two rival slates of four delegates each. Every Sanders’ caucus drew at least 200 Democrats, while Clinton’s drew 100 or fewer, officials said. 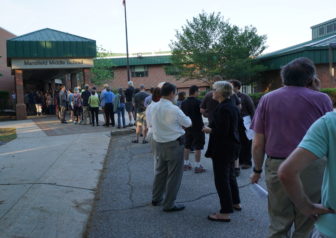 Democrats waiting in line to enter the Sanders caucus in Mansfield.

Marty Dunleavy, a former Democratic National Committee member chosen by Sanders’ national campaign to screen potential delegates, said the criteria for placement on a consensus slate was a pledge to vote for Sanders if his name is placed in nomination, support him in any rules or platform fights, and otherwise abide by his wishes.

“We’re being very explicit. That means if Bernie endorses Hillary Clinton, you stand up and cheer Hillary Clinton,” Dunleavy said. “This is a party convention. If you don’t think you’re a Democrat, you shouldn’t be running. This is the Democratic Party.”

Dunleavy recalls the bitterly divided 1980 convention, when about 500 Ted Kennedy delegates walked out on Jimmy Carter’s acceptance speech, a portent of a division that would help deliver the White House to Ronald Reagan.

“None of us are interested in seeing that,” said Dunleavy, who supported Kennedy over Carter. 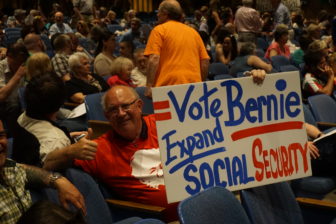 Bill Henderson, the president of the Communication Workers of America Local 1298, supported the consensus slate.

“I don’t think it’s right that someone outside our congressional district comes in and decides who’s going to be in Philadelphia to support Bernie,” Hong said. She was referring to Canty’s work to assemble consensus slates.

Canty said Hong, a former Norwich city council president who is challenging state Rep. Emmett D. Riley for the Democratic nomination in the 46th House District, seemed to be using an affiliation with Sanders to promote her legislative campaign.

The winning slate of two men and two women was assembled with an eye to the Democratic Party’s diversity goals: It included two labor representatives, Brian Anderson of AFSCME and Denise Gladue of the United Auto Workers; a black woman, Talibah Domijan; and a gay man, former Mayor Daryl Finizio of New London.

Sanders ran strongest in the 2nd District of eastern Connecticut, winning 56 percent of the vote.

“I just think there is a lot of progressive spirit here in the 2nd Congressional District,” said Anderson, the AFSCME official selected as a Sanders’ delegate. “There are a lot of economic challenges in this district, and Bernie’s message resonates.”

AFSCME has endorsed Clinton, but Anderson said he was free to support Sanders as an individual.

Of the 55 delegates apportioned based on the primary results, Clinton will get 28 and Sanders 27. Only 36 of the 55 were selected Tuesday in the district caucuses.

The Democratic State Central Committee will select the remaining 19 on June 7.

The state also will send 16 superdelegates to the convention, all but one publicly committed to Clinton. They include Gov. Dannel P. Malloy, all seven members of the Connecticut congressional delegation and other officials.