Labor and Connecticut Democrats: Can this marriage be saved? 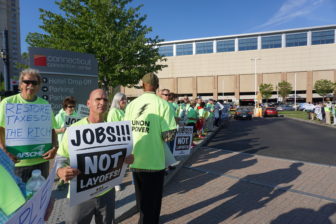 It’s an awkward separation. Some friends of the estranged couple tried to straddle the line Thursday evening at a fundraising dinner party, spending a little time with each. Inside was the Connecticut Democratic Party. Outside was its erstwhile partner, the Connecticut AFL-CIO.

Lori J. Pelletier, the president of the AFL-CIO, was on the outside looking in at the annual fundraiser for the first time in memory. To protest a state budget crafted by Democrats that lays off union members, she organized a labor boycott of the noticeably smaller dinner and the demonstration outside.

By happenstance or design, Pelletier got the cold shoulder two days earlier when Democrats rejected her as a Hillary Clinton delegate to the Democratic National Convention, even though she was to have been on a slate organized by New Haven Mayor Toni Harp.

“I know how politics is played,” Pelletier said, standing outside the dinner in downtown Hartford. “If they think that denying me a spot as a delegate is a way to get back because we’re standing up for the communities in the state and the middle class, that’s sort of shortsighted on their part. They can take all the shots they want at Lori Pelletier.”

She was wearing an electric yellow-green “UNION POWER” T-shirt, the same as the other union members, including Sal Luciano, the executive director of AFSCME, the largest union in the AFL-CIO. Pelletier said the protest was informational, not a picket line. She said she had no problem with Democrats who attended the dinner. 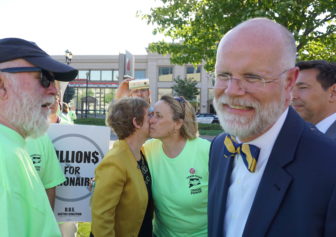 Comptroller Kevin Lembo, a potential candidate for governor in 2018, stopped by and mingled with the protesters on his way inside. His aide, Martha Carlson, gave Pelletier a peck on the cheek. One woman yelled, “Lembo for governor!”

“Even though we don’t agree on everything, it doesn’t mean we’re not friends. We’ve been working together on a lot of issues over a long period of time, and these folks are doing exactly what they are supposed to be doing,” Lembo said. “There’s supposed to be this tension, and we’ll see where it all leads.”

U.S. Sen. Chris Murphy arrived as Lembo shook hands. He greeted Pelletier before going inside, where he would deliver a speech in praise of U.S. Sen. Richard Blumenthal, who is up for re-election in the fall..

“We’ve always been a party with a big tent, and we have fights and sometimes they are tough and they are bitter,” Murphy said. He laughed and said, “These are my friends out here, and those are my friends in there.”

The AFL-CIO’s annual convention is next week. Union members will have to decide if they will deny an endorsement to Democrats they normally would support, a gesture that some union leaders acknowledge could backfire by electing Republicans and further weakening labor’s hand at the General Assembly.

Since Malloy took office in 2011, the state has imposed two of the largest tax increases in state history.

Democrats say the rejection of Pelletier as a Clinton delegate in the 3rd Congressional District was the consequence of New Haven politics, not a planned slight. Officials conceded the optics make things look otherwise.

“I know what the optics are,” said Nancy DiNardo, a former Democratic state chairwoman who is a Clinton superdelegate.

“I think it potentially creates additional difficulties,” Looney said, referring to the party’s rocky relationship with labor. “I think maybe it just adds to the wounds that already exist.”

Multiple sources said Harp, the mayor, had placed Pelletier on a delegate slate that, with the exception of Pelletier, was successful in a caucus Tuesday. But a Harp aide who ended up as moderator of the delegate selection caucus opened the floor to other nominations. Audrey Tyson, a Democratic State Central Committee member from New Haven, was nominated and elected over Pelletier, who lives in Middletown.

John Olsen, a former Democratic state chairman who preceded Pelletier as head of the AFL-CIO, said he did not think Pelletier was rejected over the boycott of the fundraiser. Olsen said every candidate at a delegate caucus is responsible for bringing supporters.

“I think what happened is you need to bring people out and support you, and if you do, you do, and if you don’t, you don’t,” Olsen said. “It was in New Haven, and obviously there are a lot of community people down there.”

Bill Henderson, the president of the Communication Workers of America Local 1298, who is expected to be selected by the Democratic State Central Committee as an at-large delegate to the national convention, said he did not hesitate to attend the dinner.

“The way change things is not on the outside,” he said. “We have to be on the inside.”