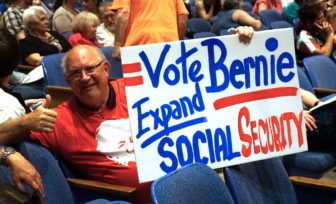 Washington – Connecticut Democrats who will represent their state at their party’s national convention in Philadelphia next month won’t encounter the usual – a scripted event that is largely a pep rally for their White House candidate.

This time the stage is set for some political drama.

The impact of a split convention – with supporters of Sen. Bernie Sanders trying to influence Democratic policy and backers of Hillary Clinton struggling for unity – will be especially felt by the Connecticut delegation to the Democratic National Convention.

Only 11 states, including Massachusetts, Illinois, Iowa, Missouri and Kentucky, have such a close, nearly 50-50 split.

“Superdelegates” in those states – party officials, members of Congress, sitting Democratic governors and other party dignitaries – are likely to tip the delegations toward Clinton. Of Connecticut’s 16 superdelegates, 15 support the former first lady.

Still, the pledged delegate split in Connecticut and other states will be roughly even.

Bev Brakeman, a vice chair of the West Hartford Democratic Town Committee, was a delegate to her party’s national convention four years ago. At that time she was a delegate for President Obama. This year she’s backing Sanders.

For Brakeman – and many Sanders delegates and the candidate himself – the priority at the convention is to influence the party’s position on key issues.

“I am going as a committed Bernie delegate, and I will be committed to the things Bernie supports.” Brakeman said.

She said she hopes there can be agreement with the Clinton delegates on issues important to her – universal healthcare, stopping a proposed trade deal with other Pacific Rim countries and making college affordable. But she also said, “I absolutely think there is going to be a lot more contentiousness” at this national convention than at others.

Brakeman was one of 18 Sanders delegates selected at party caucuses in each of the congressional districts last week. Another 18 were selected for Clinton. The rest, all at-large delegates, will be selected by the Democratic State Central Committee on June 7.

The Connecticut delegation, both those who back Sanders and those who support Clinton, will stay at the same hotel – this year a Double Tree near Philadelphia’s airport that will be shared with the Georgia delegation. Delegations usually network, socialize and politick together.

But this year may be different, said Dan Durso, a recently retired Teamsters official from Glastonbury who is a founding member of Bernie Sanders for Connecticut.

“When (Sanders) asks for unity, and at that point and that point only, will we join them,” Durso said.

“My hope is that everybody is in a spirit of unity,” said Hartford Mayor Luke Bronin, a Clinton delegate. “The real difference is between the Democratic Party and the Republican Party, which has chosen Donald Trump as its standard bearer.” 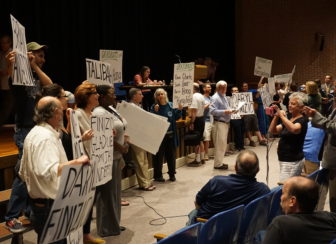 Supporters of rival delegate slates at the Bernie Sanders caucus in Mansfield.

Julie Kushner of Danbury, another Clinton delegate,  said there may be “minor differences” on the issues. “I think there will be plenty of points of agreement.”

“The people who are Clinton delegates and Sanders delegates are lifelong friends, and in some cases we work together,” said Kushner, a United Auto Workers Union official.

State Democratic parties contacted about how they will handle split delegations said they are working out logistics, but don’t anticipate a lot of conflict.

“What we’ve heard from delegates and supporters of both campaigns is that people are looking forward to an exciting week in Philadelphia,” said Leigh Appleby, spokesman for the Connecticut Democratic Party.

Travis Williams, spokesman for the Delaware Democratic Party, who is also going to host a divided delegation at the convention, said, “We’re in the process of figuring things out.”

Malloy in the hot seat

The rival camps at the convention may have an uneasy truce, but are expected to conduct vigorous exchanges on key Democratic issues, and Gov. Dannel P. Malloy will be in the thick of things.

Sanders and Clinton have differed on how much to raise the federal minimum wage, whether to replace the Affordable Care Act with a “single-payer” health care system, U.S. policy toward Israel, whether federal law should be changed to allow certain lawsuits against gun manufacturers to move forward and other issues.

Sanders wants to influence the party’s policy document, known as the platform, which will be voted on by the delegates at the convention and already has created a few dust-ups.

Sanders has demanded more influence over the crafting of the document by seating more of his supporters on a platform drafting panel – a request which was granted. The Vermont senator also asked the DNC to oust Connecticut Malloy as co-chair of the convention platform committee, a request which has been denied.

Sanders has criticized Malloy as an ardent Clinton backer. And in a letter to the DNC, campaign attorneys sought his removal as platform committee co-chair, citing the governor’s “professional, personal and political hostility” toward Sanders.

“If Bernie Sanders thinks it’s not a good idea that Malloy heads the committee, then I don’t think it’s a good idea,” said Durso.

Fellow Sanders delegate Brakeman, however, said she’s confident Malloy can strike a deal, “and that we end up with a platform that we can get unified on.”

The Democratic National Committee has taken the unprecedented step of urging all Democrats to provide testimony about the platform both on the committee’s web site and at four hearings across the nation this summer. The hearings will be held in Washington, D.C.; Phoenix, Ariz.; St. Louis, Mo; and Orlando, Fla.

“This is a different level of public engagement,” said Democratic convention spokeswoman Dana Vickers Shelley. “We felt it was important that people are aware of the process that Democrats have.”

Malloy and others on the convention platform committee hope to meet in Orlando on July 8 and 9 to make a final draft of the platform that will be given to delegates on the first day of the convention, July 25.

But under convention rules, 25 percent of the committee can agree to an alternate, “minority report” that could compete with the main party platform.

Norm Ornstein, a political scientist at the American Enterprise Institute, said there’s a good chance Sanders will agree to a certain amount of unity before delegates begin to arrive in Philadelphia next month.

“It’s not a sure thing, and some will depend on how the platform talks go,” he said.

Ornstein said there could be tension with delegates of both camps keeping to themselves, but he did not expect a “pitched battle” between Democrats.

Besides disagreements on policy positions, there is some resentment among Sanders delegates who say the national Democratic Party is running a rigged system that includes the “super delegates,” who will provide Clinton a margin of victory even if the pledged delegate count is close.

This anger flashed during a Nevada Democratic Party caucus meeting last month, when Sanders supporters rushed toward the stage and shouted obscenities because party leaders sought a rules change.

Yet Sanders campaign spokesman Mark Longabaugh also predicted there would be a certain level of harmony and cooperation.

“Even in states that are closely split in delegates, we believe both sides will come together and unite to defeat Trump,” he said.