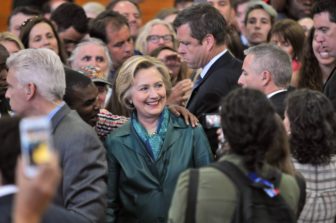 Hillary Clinton at a rally in Bridgeport before the April primary.

On the eve of contests in six states, the Associated Press declared Hillary Clinton the presumptive Democrat nominee for president Monday night on the basis of her win over the weekend in Puerto Rico and late commitments from superdelegates.

Gov. Dannel P. Malloy and Lt. Gov. Nancy Wyman, superdelegates who officially endorsed Clinton a year ago, rushed to offer congratulations to her as the first woman to clinch a major-party nomination for president.

“And it comes as Donald Trump wants to put up walls instead of tearing them down. He wants to roll back the clock with a twisted worldview, comprised of despicable rhetoric and backwards policies. He must and will be stopped — the choice before Americans now has, truly, never been starker.”

Malloy and Wyman said the choice of Clinton and Donald J. Trump, the presumptive Republican nominee, couldn’t be starker.

“I am confident that Democrats will unite behind Hillary Clinton to make sure Donald Trump is never, ever elected,” Wyman said.

A survey by Quinnipiac University, the first post-primary poll of the presidential race in Connecticut, will be released Tuesday morning.