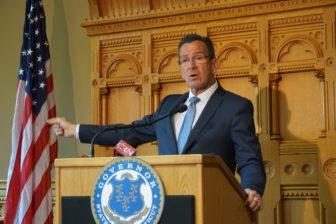 “Voters feel Connecticut’s economy is going down the drain, and they are sending Gov. Dannel Malloy’s approval ratings right down the same drain. Even Democrats disapprove of the way he is doing his job,” said Douglas Schwartz, the poll’s director.

The poll is an across-the-board repudiation of Malloy, the first Democratic governor in decades, and a vote of no-confidence in the state’s economy, factors Republicans hope will enable them to shrink the Democrats’ majorities in the General Assembly or even capture control of a chamber.

Overall, 68 percent of voters disapprove of his performance, 24 percent approve and 8 percent have no opinion. He was upside down in every subset of voters, including Democrats, whose disapprove/approve split was 47 percent to 40 percent.

The legislature fared no better: Only 24 percent approve of how the General Assembly is doing its job.

“As the most unpopular governor in America, a top surrogate for Hillary Clinton’s presidential campaign and chairman of the Democratic Governors Association, Malloy will continue to be a major liability to Democrat gubernatorial candidates everywhere over the next five months,” said Jon Thompson, the RGA’s spokesman.

A Morning Consult survey of 66,000 voters in all 50 states from January through May found Sam Brownback of Kansas to be the least popular, with Malloy second, Snyder third, Chris Christie of New Jersey fourth and Paul LePage of Maine fifth. All but Malloy are Republicans.

“We never comment specifically on polls,” said Leigh Appleby, a state Democratic Party spokesman, as he commented on the poll. “They will go up and down. But the truth of the matter is that Gov. Malloy has an exceptionally difficult job. During tough fiscal times, he has made the hard – often painful – choices necessary to create jobs and put Connecticut’s economy on the right track, and we applaud the governor for thinking long-term and doing the right thing for the future of our state.”

Malloy, 60, who was elected in 2010 and re-elected in 2014 in tight races, was hit with deep negative ratings for his handling of the economy and jobs, the budget and taxes. More than three-quarters of voters disapprove, and 61 percent say he does not care about voters like them.

Only 20 percent of the state see the economy as excellent or good, and 53 percent say it is getting worse, despite a slow, but steady recovery of jobs since the recession of 2008. In an open-ended question, 36 percent of Connecticut voters say the economy is the most important problem facing the state, while 20 percent named the budget and 17 percent taxes.

Sixty percent say it would be at least somewhat difficult for them to immediately pay an unexpected bill of $1,000, while 79 percent saw little likelihood they would lose their jobs in the next 12 months.

The governor has managed to succeed legislatively and even electorally despite low approval ratings. He came into office with less than a mandate, winning a three-way race with just under 50 percent of the vote in 2010 and then capturing a second term in 2014, despite beginning the year with only 44 percent of voters favoring his re-election.

But the new poll will reinforce what’s become clear during the recent difficult budget debate: Republicans will run against Malloy, who is not on the ballot this fall, and Democrats are certain to keep their distance as they defend majorities of 87-64 in the House and 21-15 in the Senate.

By a margin of 62 percent to 29 percent, voters disapprove of the layoffs ordered by Malloy as part of the austerity budget he recently signed into law. They were not asked if they would have preferred a tax increase, something Malloy and legislative leaders ruled out.

On his handling of transportation, a signature issue for Malloy,  50 percent disapprove, 35 percent approve and 15 percent have no opinion.

Even with crime in Connecticut at a 40-year low, the governor gets only a middling review: 44 percent disapprove, 40 percent approve and the rest offer no opinion. And that was a high point of the poll for Malloy.

The poll is based on a telephone survey by cell phones and landlines of 1,330 Connecticut voters from June 1 to 5. It has a margin of error of plus or minus 2.2 percentage points.