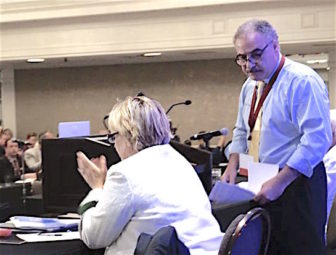 An angry Sal Luciano after his denunciation of the governor.

The Connecticut AFL-CIO vented Thursday at Gov. Dannel P. Malloy and Democratic legislators, but the labor federation will convene again Friday, probably to endorse some of the same legislators accused of betraying labor on the state budget.

The reality is that labor’s fury at Democrats in the General Assembly is tempered by the last nine pages of the program handed to every delegate arriving at the labor federation’s two-day political convention in Hartford.

It is labor’s report card for all 187 members of the state legislature, all but 22 of whom are standing for re-election this fall. The best-ranked Republicans have lifetime scores of 60 percent, lower than the worst-ranked Democrat.

When endorsements are made Friday, labor delegates predict they will largely look past the Democrats’ passage of a state budget that will cut services to needy residents and cost thousands of unionized state employees their jobs.

“I think it’s going to reflect a body of work that legislators have done,” said Sal Luciano, the AFSCME leader who also is executive vice president of the AFL-CIO. “I don’t think one bad vote is going to be determinate.”

That was the assessment Luciano gave in an interview. But his speech to the convention of 204 delegates from 77 union locals was an angry and, perhaps, therapeutic, blast at Malloy, the governor they helped elect and re-elect in two close contests against a Republican millionaire businessman, Tom Foley.

Luciano, once a social worker at the Department of Children and Families, demonstrated more than a nodding a familiarity with the five stages of grief and loss: Denial, anger, bargaining, depression and acceptance. He lingered on anger, then skipped over bargaining and depression to acceptance.

“Two years ago, we couldn’t endorse Tom Foley because we knew he would stab us in the chest,” Luciano said, setting up the line everyone knew was coming, as surely as they were counting down to a rocket launch. “And so we endorsed Dan Malloy, who ended up stabbing us in the back!”

Not everyone cheered. But those who did were loud and seemed to enjoy it. They applauded, more than a few laughed. Luciano glowered. He waited for the noise to subside.

“So what do we do now?” he asked, skipped a beat and answered, “We stop crying and do what we always do – we fight!”

The AFL-CIO endorsements will come a week after a labor protest outside a Democratic Party fundraising dinner. It was organized by the federation’s president, Lori J. Pelletier. She also had urged union members not to buy tickets.

“We’re not going to do anything that will have long-term damage to the movement,” Pelletier said in an interview.

From the dais, Pelletier gave a shout out to “our brother,” as she referred to House Majority Leader Joe Aresimowicz, D-Berlin. He stood in the back of the ballroom in the Hartford Hilton, where the staff is unionized.

Labor’s complicated relationship with Democrats is embodied by Aresimowicz. He is an AFSCME employee whose boss, Luciano, very publicly expressed his anger at Aresimowicz’s vote for the budget and his refusal to push the Democrats toward a tax increase.

Aresimowicz smiled and waved as the delegates applauded. His 2016 score on 10 votes targeted by labor was 80 percent, down from his lifetime score of 92 percent.

The applause was louder for Rep. Russ Morin, D-Wethersfield, who was a member of the Connecticut State Employees Association during his 17 years as an employee of the Department of Transportation. His lifetime score is a perfect 100 percent.

“One legislator stood up for us,” Pelletier said. “Brothers and sisters, that legislator was Russ Morin.”

Pelletier later acknowledged Rep. Toni Walker, D-New Haven, who played an important role in the passage of the hated budget as co-chair of the Appropriations Committee. Her 2016 score was 88 percent; lifetime, 96 percent.

“Toni, thank you for coming up,” Pelletier said.

Attorney General George Jepsen stopped by and was applauded, but his timing was awkward. He was still in the ballroom when Luciano described Malloy as a backstabber.

Comptroller Kevin Lembo, an ally whom some union members are encouraging to run for governor in 2018, addressed the delegates on a retirement security bill that passed in the Senate on a tie vote broken by Lt. Gov. Nancy Wyman.

As a member of the state Bond Commission, Lembo recently broke with Malloy and voted against an economic-development grant for one of the world’s richest hedge funds, Bridgewater. Lembo noted the spending cuts forced by “a new economic reality.”

“If I have to say no to a victim of domestic violence because of the new fiscal reality, I’m going to say no to a corporate CEO as well,” Lembo said.

He left to cheers.

Labor is struggling to find its footing this year, not only because of conflicts with erstwhile allies.

The majority of states have adopted “right-to-work” laws, which allow employees to opt out of unions and refuse to pay fees in companies where wages and benefits are negotiated by unions. In Connecticut, labor felt ignored during the crafting of a budget produced and passed by Democrats.

After two major tax increases in six years, Malloy and the legislature’s Democratic majority never seriously considered another tax hike sought by labor to offset the need for cuts. In Hartford, the new Democratic mayor, Luke Bronin, outraged labor by asking the legislature for the power to sidestep labor agreements to cope with a budget crisis.

Luciano said the failure of Bronin’s proposal was a highlight in an unhappy year at the General Assembly, where Democrats hold majorities of 87-64 in the House and 21-15 in the Senate.

Members of the AFL-CIO’s committee on political education met privately on Wednesday night, talking about how to approach endorsements. One union’s political director says it was apparent that pragmatism eventually would rule.

Pelletier declined to comment in detail, but she acknowledged the tenor of the talk, which included an assessment of what a Republican legislature might mean. The lifetime labor scores of House Minority Leader Themis Klarides, R-Derby, and Senate Minority Leader Len Fasano, R-North Haven, are 41 percent and 46 percent, respectively.

“We had a long discussion last night,” she said. “We spent three hours just discussing it.”

Republicans voted against the budget, a correct vote on labor’s scorecard, even if they acted for what labor considered to be the wrong reasons. Some Republicans wanted structural changes that the AFL-CIO sees as anti-labor, and none of them were advocating for the taxes on the rich sought by labor.

“That’s not who we want to empower,” Pelletier said. “One vote is important, for both reasons, but at the same time we also know the bigger picture.”