Malloy: No regrets for remarks that infuriated Bernie Sanders 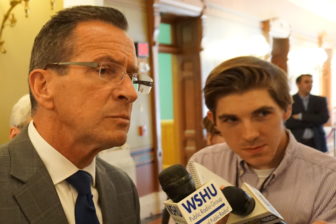 Gov. Dannel P. Malloy strained Friday to avoid escalating his profile as an irritant to Bernie Sanders and a potential impediment to Sanders’ eventual endorsement of the presumptive Democratic presidential nominee, Hillary Clinton.

“I’ve tried to stay out of that controversy, and I will continue to try to stay out of that controversy, no matter how hard you work,” Malloy told reporters in Hartford. “The reality is there are differences between Sen. Sanders and myself on gun legislation. On the other hand, we are Democrats; we’re coming together; we’re going to win this election.”

Malloy said no one from the Clinton campaign or Democratic Party has suggested that he step down from his role as a committee co-chair at the Democratic National Convention in Philadelphia in the interest of party peace. He offered no hint he would voluntarily offer his resignation.

The Sanders campaign has repeatedly demanded that Malloy and former U.S. Rep. Barney Frank of Massachusetts, two Clinton supporters who clearly have gotten under Sanders’ skin, be removed from their convention roles, Malloy as co-chair of the platform committee, Frank as co-chair of the rules committee.

In recent days, Sanders’ staff members have suggested that their removal might speed an endorsement or even be a requirement. As a Clinton surrogate, Malloy criticized Sander’s vote in the U.S. Senate for legislation exempting gun manufacturers from liability lawsuits.

“Governor Malloy has unfairly ascribed blame for national gun control laws single-handedly to Senator Sanders, referring to the three-day wait provision of the Brady Bill as the ‘Charleston-Sanders loophole,’ ” the Sanders campaign said in a complaint to the Democratic National Committee. “Malloy has even ventured that Senator Sanders should be ‘held accountable’ for the ‘death and destruction’ caused by his ‘mistakes.’ ”

On Friday, Malloy was asked if he thought any of his remarks were inappropriate or if he had any regrets.

His reply: “I regret that he took exception to it.”