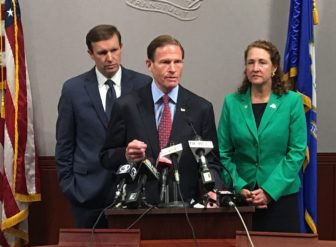 Less than 36 hours after a shooting at an Orlando nightclub left 49 people dead and more than 50 others injured, three Connecticut lawmakers renewed their calls for federal action to combat gun violence, including increased background checks, a ban on the sale of assault weapons and a ban on the purchase of any weapons while on the FBI’s terrorist watchlist.

U.S. Sen. Richard Blumenthal, joined by fellow Democrats U.S. Sen. Chris Murphy and U.S. Rep. Elizabeth Esty, said Monday he hoped the shooting in Orlando would provide “the impetus and momentum” necessary to “create a change in the political dynamic.”

“There are many lessons to be learned from this horrific tragedy,” Blumenthal said. “Congress will continue to be complicit, and there will be repeated acts of mass murder … whether on the streets of Hartford or in rural areas around Connecticut … so long as Congress fails to act.”

The three legislators said Monday’s press conference would be the first step in a concerted effort to pass new legislation to ban assault weapons – the centerpiece, they said, of any true reform effort at the federal level. They face the challenge of legislating in the middle of a contentious presidential election year where partisan gridlock could make finding support across the aisle more difficult.

But Esty said the shooter’s possible ties to ISIS could bring more legislators to the table in a way the Sandy Hook school shooting in 2012 and others did not.

“The terrorism aspect does make this different,” Esty said. “I am hopeful that I will have the opportunity to meet later today, when I fly down to Washington, to talk to my Republican colleagues who I work with on manufacturing issues and veterans’ issues to say, ‘Can’t we do better?’ The American people deserve smart and tough policies, and we can do something.”

Murphy called existing laws that allow the sale of assault weapons “a gift” to ISIS. He said the advance of U.S.-backed forces in Iraq and Syria means the only way ISIS can continue to survive is by moving its fight outside of the Middle East through “lone-wolf attacks.”

Blumenthal acknowledged some of the drawbacks in past federal legislation banning the sale of assault weapons. Addressing questions about the difficulty of defining an assault weapon, he said lawmakers would have to work to ensure the definitions included in the bill would allow as few loopholes as possible.

While the legislation being crafted would ban the future sale of assault weapons, Blumenthal said, it would not “realistically” be able to take existing assault weapons out of the hands of owners.

But other measures beyond the bans and background checks are also necessary, Blumenthal said. A complete reform package, he said, would include measures to prevent weapons trafficking and so-called “straw” gun purchases while creating new mental health initiatives and school safety policies.

The shooting in Orlando, which took place at about 2 a.m. Sunday, became more personal for Connecticut lawmakers when news broke that one of the victims was a former Connecticut resident who had just moved to Florida.

Esty said the victim, Kimberly “K.J.” Morris, worked as a bouncer at the nightclub where the shooting took place, having just moved to Orlando from Torrington.

In an earlier version of this story, Rep. Esty was quoted as saying that Kimberly Morris was 20 or 21 years old. Esty’s office says the congresswoman was in error and Morris is 37.