Washington – Senate Democrats, including those representing Connecticut, escalated the pressure on GOP colleagues Tuesday to revisit and pass legislation that would prohibit those on the federal terrorist watch list from purchasing a gun.

Supporters argue that prohibition would prevent people like Orlando shooter Omar Mateen from purchasing firearms. Mateen used a Glock pistol and a semi-automatic rifle to kill 49 and wound another 53 at the Pulse nightclub on Sunday.

Mateen was investigated twice by the FBI, in 2013 and 2014. He was initially put on the terrorist watch list, but was removed after the FBI dropped the first probe. Both investigations ended without charging Mateen.

In December, all but one Senate Republican voted against the measure, introduced by Sen. Dianne Feinstein, D-Calif., and co-sponsored by Connecticut Sens. Richard Blumenthal and Chris Murphy.

There was still resistance Tuesday to the legislation from many Republicans.

“I don’t know that it would have kept (Mateen) from getting a gun,” said Sen. Richard Shelby, R-Ala., who pointed out Mateen wasn’t on the terrorist list when he bought his weapons. 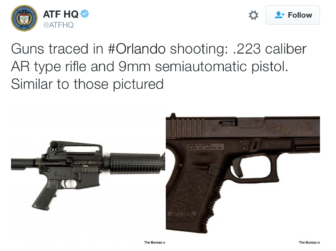 A tweet from the federal bureau of Alcohol, Tobacco, Firearms and Explosives identifying the types of guns used in the Orlando slayings.

On Tuesday, Democratic supporters of the legislation planned strategy on how to press for another vote on the bill in a chamber in which they are in the minority and don’t control the floor schedule.

Blumenthal said a decision was made to try to attach the “terror gap” bill to a spending bill that would fund Justice Department agencies, including the FBI, and couple it with a boost in funding for the FBI to try to win GOP support.

At the very least, another vote on the terror gap bill would put some Senate Republicans in tight races this year in a tough position.

“Let them all vote against a bill we are going to bring up as soon as we can on the terrorist watch list. Let them all vote no again on that. See how the American people like that,” said Senate Minority Leader Harry Reid, D-Nev.

Some Republicans said they are opposed to using the watch list to ban gun purchases because many people have been placed on it in error.

Murphy said all government databases are flawed, including the one used by the FBI to screens gun buyers that prohibits criminals and those involuntarily committed for mental problems from making a purchase.

“There are problems with every federal and private database that exists,” he said.  “There are people on the current list of those that are prohibited to carry weapons who were wrongfully convicted or mistakenly on that list. But we invest in correcting the list rather than in eviscerating it.”

There was evidence Tuesday of cracks in GOP opposition to the terror gap bill.

“It’s under discussion right now,” said Sen. Dan Coats, R-Ind., when asked if there could be a shift in Republican positions.

In testimony to Congress in 2014, the FBI said there are about 800,000 names on the consolidated terror watch list — a database of known and suspected terrorists that is not made public — including both Americans and foreigners.

Included in the list is a smaller roster known as the “No Fly List,” which prevents those on it from boarding flights in and out of the United States and a “Selectee List,” which subjects individuals to additional screening.

The identities of those in the database are not made public, but state and local law enforcement officials can run the names of those stopped and arrested against the list.

In December, Gov. Dannel Malloy said he would use his executive authority to add those on the terrorist list to the people who are banned in Connecticut from purchasing a gun.

But Malloy has yet to receive White House permission to use the list that way, the governor’s spokesman, Devon Puglia, said Tuesday

“The White House counsel’s office is still reviewing the request, and there has been no official decision,” Puglia said. “If we get the authority to move forward, we will sign the Executive Order immediately.”

Shortly after the Sandy Hook shooting at the end of 2014, New Jersey toughened its state gun laws, adding those on the terrorism list to those banned from buying guns in the state.

New Jersey State Police Capt. Stephen Jones said Tuesday the state did not seek permission from the White House and has been operating its program for nearly three years. He declined to say how many gun purchases had been refused because the would-be buyer appeared on the watch list.

Terror list legislation may even have a tougher time in the U.S. House of Representatives.

On Tuesday, House Republicans blocked consideration of a bill sponsored by Rep. Peter King, R-N.Y., that would have barred those on the “No Fly” list, as well as all on the consolidated terrorist list, from purchasing a gun.

“It is appalling that days after our nation has suffered such a terrible attack, Republicans would vote to protect suspected terrorists’ ability to arm themselves to the teeth at American gun stores,” said House Minority Leader Nancy Pelosi, D-Calif. “Republicans’ decision to block the bipartisan ‘No Fly, No Buy’ bill is dangerous and indefensible. If you’re too dangerous to fly, you’re too dangerous to buy a gun.”

Gun safety advocates in Congress are also seeking to re-impose a federal ban, dropped in 2014, on the sale of semi-automatic rifles like the one used by Mateen and Sandy Hook shooter Adam Lanza.

Chris W. Cox, executive director of the NRA Institute for Legislative Action, said renewed calls for gun control are “a transparent head-fake (that) should scare every American, because it will do NOTHING to prevent the next attack that we all know is coming.”

“The terrorist in Orlando had been investigated multiple times by the FBI. He had a government-approved security guard license with a contractor for the Department of Homeland Security,” Cox said. “His former co-workers reported violent and racist comments. Unfortunately, the political correctness of the Obama administration prevented anything from being done about it. Radical Islamic terrorists are not deterred by gun control laws. “