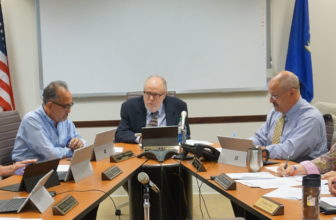 The Connecticut Democratic Party and the State Elections Enforcement Commission agreed Monday to settle a case that threatened to undermine campaign finance reforms inspired by the scandal that toppled Gov. John G. Rowland: a ban on donations from state contractors and a voluntary system of publicly financed campaigns.

In an agreement approved by the commission on a 2-1 vote, the Democratic Party will make a record $325,000 payment, drop a challenge to the commission’s jurisdiction and end its protracted fight with elections regulators over the use of contributions from state contractors into a federal account to support the re-election of Gov. Dannel P. Malloy in 2014.

Michael J. Brandi, the general counsel and executive director of the elections commission, called the payment “a significant penalty,” but the party admitted no wrongdoing and the settlement characterized the $325,000 as “a voluntary payment,” one roughly equivalent to the the value of the disputed expenditures.

“They can call it whatever they want, but the $325,000 fine is unprecedented and proves the seriousness of this violation of the law,” said House Minority Leader Themis Klarides, R-Derby.

More importantly, Brandi said, the party agrees to new guidelines that resolve a significant conflict in state and federal election law and end litigation that could have produced a court ruling curtailing the ability of state regulators to enforce the Rowland-era campaign reforms enshrined in the Citizens’ Election Program.

The Democratic Party agrees to new accounting rules and other restrictions intended to keep campaign money prohibited by state law out of state campaigns. It also drop its claim that federal election law pre-empts the commission from issuing subpoenas to investigate alleged potential violations of state elections law.

“We’re trying to move forward here with a stronger Citizens’ Election Program and certainly preserve the authority of the State Elections Enforcement Commission to enforce the laws in Connecticut,” Brandi said. “All we can say is nobody can sit here and tell you what a court would do in its decision, and the commission acted in what it thought was the most responsible way to resolve the matter so that there is once again a clear pathway.”

Brandi said the settlement creates a clear roadmap for the Democratic Party to follow to finance its campaigns without the use of funds that are legal under federal law and illegal under state law.

“This is a positive step forward for the Democratic Party and, more importantly, the state of Connecticut. The voluntary agreement we have entered into will clarify a fundamental legal question that we raised and pursued in order to resolve a conflicting intersection between state and federal law, and it will help ensure the continued viability of the Citizens’ Election Program going forward,” said Michael Mandell, the executive director of the Democratic Party. 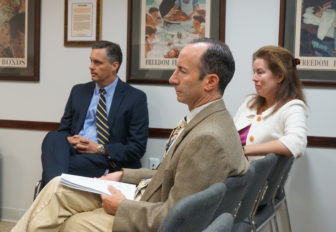 But Republicans expressed dismay over what the settlement would short-circuit: the commission’s attempt to compel Democrats to divulge emails, bank records and other documents spelling out how the party came to target state contractors for campaign contributions.

“They paid all this money in order to avoid emails being released,” said J.R. Romano, the state Republican chairman. “This isn’t about better government for them.”

Romano declined comment on whether the GOP would abide by the same limits imposed on Democrats, saying he first wanted to read the settlement and review it with lawyers.

Senate Minority Leader Len Fasano, R-North Haven, issued a statement at midday urging rejection of the settlement negotiated by lawyers for the party and commission, details of which were published online by The Hartford Courant and CT Mirror. The deal was approved 90 minutes later, with the sole dissenting vote cast by Michael J. Ajello, who was appointed by Fasano’s predecessor as minority leader, John McKinney.

“The SEEC must continue to stand firm and reject the deal proposed by the state Democrat Party,” Fasano said. “The SEEC has the moral and legal obligation to enforce our clean election laws and protect taxpayers. They need to reject this proposed deal to show that our state cannot be bought. They must complete their fact-finding to ensure that transparency and the law prevails.”

Ajello left the meeting without comment. Salvatore A. Bramante, a Republican appointee, and Anthony J. Castagno, a Democratic appointee, voted in favor.

Devon Puglia, a spokesman for Malloy, said the governor had no comment, calling it “a party matter.” Republicans hoping to gain seats in the General Assembly this fall felt no such constraint.

“The governor should hang his head in shame for allowing this deal to happen. To protect himself, he’s throwing away the sanctity of Connecticut’s clean election laws,” Fasano said after the commission’s vote. “He is allowing the truth to remain hidden because those emails would be devastating for him. If that’s not the case, then I urge the Democrats to prove me wrong and publicly share the emails. How can anyone trust state government when it operates in the dark?”

Klarides said the Democrats willingly risked a fine in return for using state contractor contributions during the 2014 campaign.

“After all, it’s just money and they must feel they can easily shake down more high-end donors and state contractors to fill the coffers back up in time for the next election,” Klarides said. “The Democrats preach clean elections and transparency in government and in the end they write out a check and make the issue go away.’’

Brandi said no contractor money can be used to pay the settlement, only “clean money.”

Republicans in the legislature opposed the Citizens’ Election Program, the result of a compromise reached in 2005 between Gov. M. Jodi Rell, the Republican who succeeded Rowland, and legislative Democrats.  Nearly all candidates for the General Assembly now use public financing for their campaigns.

“It is clear to us that the decision by the State Elections Enforcement Commission to settle on these terms was not taken lightly, but rather reflects its careful consideration of the best interests of the programs it administers, including the Citizens’ Election Program,” Zinn-Rowthorn said.

A central issue raised in the complaint filed in 2014 by Jerry Labriola, then the Republican state chairman, was the conflict between state and federal campaign finance law: Connecticut bars state contractors from donating to state campaigns, while federal law dictates the rules for raising and spending money that is used for get-out-the-vote efforts in federal election years, when state elections are also held.

Labriola complained that Malloy and the Democratic Party were subverting the public financing program. 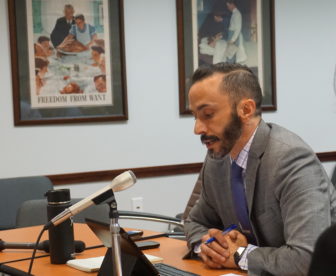 Essentially, candidates, campaigns and political parties operate under two sets of contradictory campaign financing rules: one provides public financing to candidates who agree to accept donations of no more than $100 and abide by spending limits that vary by office; the other allows state parties to accept maximum donations of $10,000 a year and spend unlimited amounts supporting their candidates.

Malloy benefitted from both systems.

“This was a huge loophole that threatened the viability of our clean elections program,” Brandi said.

Malloy was Connecticut’s first governor to win using public financing, defeating self-funding opponents who outspent him in the Democratic primary and general election in 2010. He was re-elected in 2014 with $6.5 million in public financing –and the support of a party that financed a sophisticated get-out-the-vote machine with funds Malloy helped attract, beginning with more than $1.5 million in 2013. That was triple what the Democratic Party had collected four years earlier in the runup to the 2010 election, when it did not control the governor’s office.

The Democrats claimed that not only did federal law permit the use of the federal account to pay for get-out-the-vote efforts that benefitted Malloy, but that the federal law required it.

The Democrats were fighting an investigative subpoena issued by the commission for emails, bank records and other documents, arguing that federal campaign law pre-empts the investigation. At the time of the proposed settlement, a Superior Court judge was poised to rule on the commission’s motion to compel the party to abide by the demand for documents.

The dispute began over an obscure mailing late in the 2014 gubernatorial campaign, but it quickly escalated into a legal battle with potentially dire consequences for Malloy, the state party and the authority of the commission. If the Democrats succeeded on their pre-emption issue, the commission could lose much of its ability to enforce the campaign finance reforms.

An intriguing element of the case was an effort to explore how the Connecticut Democratic Party came to solicit state contractors, regulated industries and beneficiaries of state aid for campaign contributions. The party’s lawyer, David Golub, told a judge in December that the information was “highly privileged and confidential.”

Golub told Superior Court Judge Antonio C. Robaina that the party had no obligation to disclose its fund-raising strategy or internal communications.