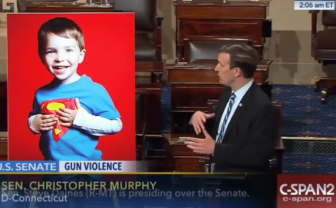 Sen. Chris Murphy displays a poster of Newtown shooting victim Dylan Hockley as he comes to the end of his filibuster on the Senate floor early Thursday.

Washington – Nearly 15 hours after he launched a filibuster to pressure GOP colleagues to allow votes on gun control measures, U.S. Sen. Chris Murphy ended his marathon saying there had been an agreement to vote on two measures.

One would bar those on a terrorist watch list from purchasing firearms and the other would expand background checks.

“There’s no guarantee that those amendments will pass, but we’ll have some time to take the movement that exsisted before we stared and maybe is a little bit stronger now and try to prevail upon members to take these two measures and turn them into law,” he said.

Murphy took the floor at 11:21 a.m., running down the list of mass shootings that have occurred since Adam Lanza shot 20 first-graders and six adults at Sandy Hook Elementary School in December of 2012. He ended his marathon speech with a tribute to two of the Newtown victims, student Dylan Hockley and teacher aide Anne Marie Murphy, in whose arms Dylan was found after the shooting.

Before he began the filibuster, Murphy tweeted that he would go “as far as I can” and would speak until “we get some signal, some sign that we can get a path forward on addressing this epidemic in a meaningful, bipartisan way.”

He ended the filibuster speaking about the victims of the Newtown, just as he had more than three years ago in his inaugural speech in the Senate. (See  video below.)

Standing beside a poster of Hockley in a Superman tee-shirt, Murphy told the story of the slain first-grader and the teacher aide who would not leave his side.

Murphy said he received about 10,000 calls, mostly supportive, to his Washington, D.C., office on Wednesday. He tweeted after the filibuster that, “This would never have happened without you. Without your outpouring of support – your calls, tweets & emails. Your deafening calls for action.”

According to Senate rules, Murphy’s right to continue speaking could not be taken away unless he ceded the floor to another senator. But others could help Murphy with his filibuster if they ask him questions about his speech.

Booker said he planned the talkathon with Murphy Tuesday.

“We cannot go on with business as usual in this body,” Booker said.

“Some fights are too important to stay silent. Preventing gun violence is one of them. Stand strong @ChrisMurphyCT,” Clinton tweeted.

Supporters of tougher gun safety measures reignited their efforts in Congress after Sunday’s slaughter in Orlando.

Blumenthal, who stayed with Murphy through the end of the marathon, said it cracked the wall of opposition in Congress to considering gun safety legislation, but there was much work for advocates ahead.

“We are at the beginning of the efforts to pass these measures, but we changed the debate,” he said.

Late Wednesday, state Rep. Dan Carter, a Republican who is running against Blumenthal, accused Connecticut’s senators and the Connecticut Democratic Party of “using the horrible terrorist attack in Orlando to raise ‘blood money’ to fund their egotistical agendas.”

“As has too often been the case, Senators Blumenthal and Murphy have made instances of national tragedy more about themselves and their agenda than about the victims, survivors and doing what’s right,” Carter said. “Sadly, today is no different.”

Several Republicans who were in the Senate chamber walked out shortly after Murphy made his intention to filibuster known. David Popp, spokesman for Senate Majority Leader Mitch McConnell, R-Ky., said Murphy’s effort was interfering with Senate business.

“Sen. Murphy’s effort today prevents the Senate from processing any amendments, including amendments he supports, as well as efforts proposed by Republicans to help prevent terrorist attacks here at home,” Popp said. “And at the same time [it] slows passage of funding for the FBI and other Justice Department agencies.”

Murphy seized the floor shortly after the Senate voted to begin debate on a spending bill that would fund the Commerce and Justice departments. Democrats want to attach “terror gap” legislation to the spending bill. It would bar those on a federal terrorist watch list from purchasing weapons.

Another proposed amendment would expand FBI background checks of gun purchasers to include weapons purchased at gun shows and from individuals online.

Sen. Murphy’s tweet saying there will be a vote on two gun safety measures

Democrats are also seeking a ban on the type of semi-automatic rifle used in Newtown by Adam Lanza and in Orlando by Omar Mateen, who killed 49 and wounded another 53 at the Pulse nightclub on Sunday. But that ban has not been introduced.

Connecticut’s House members migrated over to the Senate Wednesday to witness the event that captivated the Capitol. Before he took to the Senate floor, Rep. Elizabeth Esty, D-5th District, gave the senator a “CARE package” with foot cushions, hot dogs, diet Mountain Dew and “plenty of Red Bull.”

Murphy’s Democratic allies helped fill the hours of talk, reciting, one by one, the names and stories of the victims of the Orlando shooting. Most lawmakers spoke slowly and deliberately to eat up time, but there were moments of drama

Nelson displayed photos of the weapons used in the Orlando attack, then a large poster-sized photo of bloody running shoes that belong to Orlando trauma surgeon Joshua Corsa.

Nelson read a statement from Corsa that said, “On these shoes, soaked between the fibers, is the blood of 54 innocent human beings.”

Sen. Jeff Merkley, D-Ore., revealed for the first time that his cousin, Rebecka Ann Carnes, was one of nine people killed at Umpqua Community College in Oregon last year.

There were indications Wednesday that the Democratic campaign was shaking GOP opposition to changing federal gun laws.

Republican Presidential hopeful Donald Trump said he would schedule a meeting soon with the National Rifle Association to discuss legislation that would ban people on the terrorist watch list from buying firearms.

Vulnerable GOP senators up for re-election were also thinking of supporting the “terror gap” bill, including Sen. Rob Portman, R-Ohio, who said he is ready to back it if a compromise can be reached.

But an effort to craft a deal by Sen. Pat Toomey, R-Pa., floundered.

“Unfortunately, the so-called negotiations that took place today were little more than a smokescreen by Republicans trying to give themselves political cover while they continue to march in lock-step with NRA’s extreme positions,” said Senate Minority Leader Harry Reid, D-Nev.

The Senate  record for the longest filibuster belongs to former U.S. Sen. Strom Thurmond, who spoke for  24 hours and 18 minutes against the Civil Rights Act of 1957.

More recently, in September of 2013, Sen. Ted Cruz, R-Texas, spoke on the Senate floor for more than 21 hours about the need to defund the Affordable Care Act.