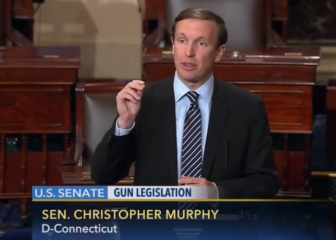 Washington – For the second time since the slaughter at Sandy Hook Elementary School, the U.S. Senate has rejected an effort to expand FBI background checks of gun purchasers.

Lawmakers also killed an effort to bar those on the terrorist watch list from purchasing weapons, as well as two competing GOP proposals.

The 44-56 vote on the legislation that would expand FBI background checks, sponsored by Sen. Chris Murphy, D-Conn., was scheduled after Murphy held a nearly 15-hour filibuster last week to press GOP Senate leadership to allow votes on gun legislation. Sixty votes were needed for approval.

The effort to bar those on the terrorist watch list from purchasing guns, called the “terror-gap” provision, failed on a 47-53 vote.

“Today’s votes would never have occurred were it not for the loud voices of the American people echoing through the halls of the Capitol last week,” Murphy said. “After the deadliest shooting in American history, Senate Republicans weren’t even going to discuss, let alone vote on, measures to stop this endless mass murder enveloping our country.

Murphy, who gave the last speech before the Senate began to vote on the gun legislation – amendments to a spending bill that would fund the Commerce and Justice Departments – said it was likely all measures would fail, given the deep partisanship in Congress over gun control. But he said it was a test that put senators on the record on the issue. “We are going to see where people stand,” he said.

Murphy lost the support of three Democrats on the background-check vote, Sens. Heidi Heitcamp of North Dakota, Joe Manchin of West Virginia and Jon Tester of Montana. He picked up support from only one Republican, Sen. Mark Kirk of Illinois.

The Murphy amendment was a modification of legislation rejected by the Senate a few months after the Sandy Hook shooting that claimed the lives of 20 first graders and six educators. It would have expanded FBI background checks to sales at gun shows and by individuals over the Internet. It also would have stripped federal policing grants from states that do not fully report felons and those involuntarily committed to mental institutions to the National Instant Criminal Background Check System. 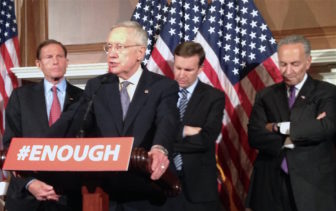 “To hear my colleague discuss it, you would think these gun shows are lawless free-for-alls that sell guns to felons and terrorists,” said Sen. Charles Grassley, R-Iowa.

The Senate also rejected, on a 53-47 vote, a Republican proposal sponsored by Grassley that also would have added funding to the FBI background check system. But the GOP proposal would have allowed some of the people now barred from purchasing a gun because they have been involuntarily committed to a mental institution to purchase a gun.

Also rejected was a rival proposal sponsored by Sen. John Cornyn, R-Texas, that would have allowed the U.S. attorney general to block a gun sale to someone on the terrorist list, but only after going to court to obtain permission.

“They aren’t even half measures,” Murphy said of the GOP proposals. “They are just shields for members who don’t want to do the right thing.”

The Senate visitors’ galleries, usually empty at that time of the evening, were filled with people, some wearing orange “Enough is Enough” tee shirts in commemoration of the victims or the Orlando shooting.

After the failed votes, several Democrats vowed to continue the fight.

“We are not giving up or going away,” Blumenthal said.

Blumenthal said his reaction to the failure of the background check and “terror gap” legislation was the same as it was when the Senate three years ago failed to approve new gun restrictions.

Blumenthal also said the Orlando shootings have altered “the political dynamics” regarding gun safety. “It is a sea change,” he said.

Sen. Corey Booker, D-N.J., said, “If we do nothing, more people in this country will likely die.”

Sen. Bill Nelson, D-Fla,. asked “what am I going to tell 49 grieving families” in Florida? “Sadly, I’m going to have to tell them the (National Rifle Association) won again,” he said.

Like the legislation that would expand FBI background checks, the amendment that would bar people on the terrorist list from purchasing weapons has failed before. It was rejected the day after the mass shooting in San Bernardino in December. 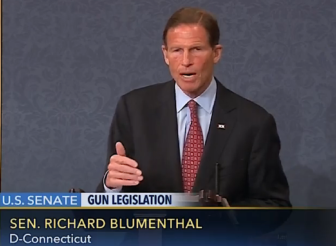 Sponsored by Sen. Dianne Feinstein, D-Calif., the amendment would have allowed the U.S. attorney general to ban anyone on the FBI’s various terrorist watch lists from purchasing a weapon, leaving the discretion on whom to bar to the Justice Department because there might be times the move would tip off a suspect that they are on the watch list.

Connecticut Gov. Dannel Malloy is also trying to use the terrorist list to bar the sale of guns in Connecticut, but for six months has said he’s been negotiating with the White House counsel’s office.

“There has been no official decision,” said Malloy spokesman Devon Puglia. “If the request is approved, we will sign the executive order right away.”

Right after the vote, Malloy blasted the GOP-controlled Congress for failing to act on gun control.

“The senators who voted against this legislation tonight should be ashamed,” he said. “Not only for voting against the vast majority of Americans who overwhelmingly support these common-sense policies, but also for putting their own interest before safety.”

Republicans argued the list of people affected by the “terror gap bill” would be too broad and strip those banned of a constitutional right to own a firearm without due process.

To try to brook the divide, Sen. Susan Collins, R-Maine, is trying to fashion a compromise that would prevent people on the “no-fly list” and a “selectee list,” a roster of people who are subject to additional screening before boarding a plane, from purchasing weapons.

The federal terrorist contains about 1 million names, but all but about 5,000 of these people live overseas. There are about 1,000 people on the “no-fly” list and about 1,700 on the “selectee list” who are living in the United States.

Senate Minority Leader Harry Reid, D-Nev., was supportive of Collins’ efforts, “everybody likes Susan,” he said. But he was skeptical enough Republicans would vote for the compromise.

Murphy said Collins’ effort “could be something that works,” but also said the Maine senator has not released details of her plan.