With parting shot at ‘insiders,’ August Wolf folds his campaign 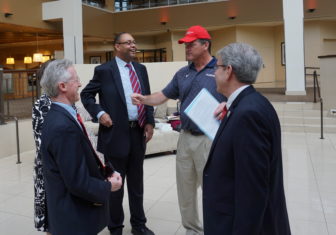 Wolf exits the race after an unlucky 13 months as a first-time candidate for office. The publicity the Stamford businessman’s campaign generated largely was unwanted, much of it detailing a series of staff defections, firings and litigation that caused the GOP establishment to all but beg Carter to seek the nomination.

“After 12 months of campaigning, an insider-rigged convention denied us primary ballot access – so we made a decision to petition,” Wolf said. “Sadly we learned this week that our effort fell short, and despite the efforts and encouragement of many, we are now forced to suspend the campaign. Our example will continue to discourage outsiders from taking the plunge.”

Delegates to the Republican state convention embraced Carter, a candidate for little more than a month, and rejected Wolf. After a series of first-ballot vote switches, standard fare at Democratic and GOP endorsement conventions, Wolf fell short of the 15 percent convention vote to automatically qualify for a primary.

To force a primary on Aug. 9, Wolf had to gather the signatures of 8,079 registered Republicans, a number equal to 2 percent of the GOP registration in Connecticut. The deadline was 4 p.m. on June 7. He quit the race before the secretary of the state’s office announced a final tally.

Among the places where Wolf tried to gather signatures was the GOP’s annual fundraiser, the Prescott Bush Awards Dinner. His campaign workers asked Carter to sign as he and his fiancee arrived. They laughed and posed for pictures, but declined to share their signatures.

“The goal of this campaign was always to ensure the people of Connecticut six years of solutions, not six more years of political theater. Dick Blumenthal has ruined this state. He is a complete and utter failure,” Wolf said in his statement. “His tenure as attorney general contributed to the demise of this once great state, and now he is hurting the entire nation. We deserve people who want to solve real issues; people who are willing to get stuff done!”

Wolf supplied his own theater, albeit with talking points scripted by others.

A former campaign fundraiser claimed in a lawsuit recently that Wolf violated election laws, created a hostile work environment with explicit sexual banter, and reneged on a $50,000 compensation deal. Samantha Menh was the latest former aide to allege a frat-boy atmosphere in the campaign. 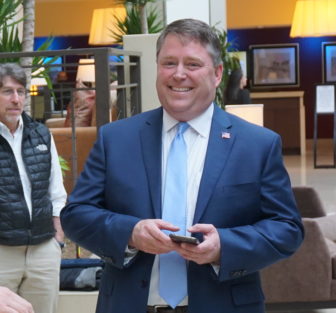 Dan Carter was amused when a Wolf campaign worker suggested he sign a petition.

Her lawsuit extensively quoted a long passage from a CT Mirror article about the campaign’s troubles as the factors that caused her to demand a $50,000 guarantee for signing on with Wolf.

Wolf mentioned none of those difficulties Tuesday, only the challenges faced by an outsider trying to gain the GOP nomination for statewide office.

He ended with an offer of support for Carter, a three-term state representative from Bethel.

“I have gotten to know Representative Dan Carter at campaign events; he is someone Connecticut can be proud of – I wish him the best in his campaign this fall,” Wolf said. “Ultimately we share the same goal: sending Dick Blumenthal home. I will support Dan as I can, especially where I have demonstrated some strength, in fundraising.”