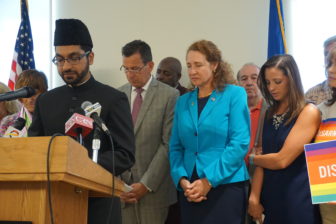 Farmington – If the gun lobby has a soft underbelly, congressional Democrats and their allies seem to be betting it is the refusal to compromise, especially on the issue of whether individuals barred from commercial airlines as a security risk should be able to purchase firearms.

“In America, you can be so dangerous to national security that you can be on a list that you can’t get on an airplane, but it is perfectly legal for you to buy as many weapons as you want and as much ammunition,” said U.S. Rep. Elizabeth Esty, D-5th District. “That is unacceptable.”

Esty joined U.S. Rep. Rosa L. DeLauro, D-3rd District, Gov. Dannel P. Malloy and other gun control advocates Wednesday at the University of Connecticut Health Center for one of more than 100 “national day of action” events to exploit a sense that the NRA’s stance of not now, not anything might no longer be viable – at least during campaign season.

U.S. Sen. Lindsey Graham, R-S.C., a gun owner, is one of the GOP lawmakers displaying a new sensitivity to the interplay of the debates on terrorism, national security and gun control. “The Constitution’s a sacred document, but it is not a suicide pact,” Graham told the New York Times. “This is not hard for me. Due process is important, but at the end of the day, we are at war.”

At the UConn Health Center, Esty and the others, including the head of emergency medicine, Dr. Richard A. Kamin, tried to broaden the debate to other areas in which they believe NRA can be made to be seen as obstructionist, citing its opposition to adequate resources for timely background checks and its role in discouraging the Centers for Disease Control and Prevention from research on gun violence.

Dylann Roof, who is charged with the shooting deaths of nine people at a historic black church a year ago, was able to buy the .45-caliber handgun used in the attack after the FBI failed to complete a background check in the required three days. Subsequent investigation discovered that Roof had a record that should have disqualified him from buying the gun.

Gun-control advocates say three days is too tight a time-frame, regardless of the resources appropriated by Congress.

DeLauro also blamed the NRA for the refusal of Congress to rescind a 1996 measure, the Dickey Amendment, that bans CDC research that could encourage gun control. It was authored by U.S. Rep. Jay Dickey, R-Arkansas, an NRA member, after the gun lobby took offense to CDC-funded research about the role of guns in suicides.

“Our results offer strong evidence that the ready availability of guns increases the risk of suicide in the home. Homes with handguns and homes where firearms were not locked up or were kept loaded were even more likely to be the scene of a suicide than homes where firearms were kept securely stored,” the authors wrote in a New England Journal of Medicine article. Their conclusion: “People who own firearms should carefully weigh their reasons for keeping a gun in the home against the possibility that it may someday be used in a suicide.”

They did not suggest any gun control measures.

Dickey, who lost his seat in 2000, has since expressed regret about the amendment.

The American Medical Association, which convened its annual meeting hours after the Orlando shooting, issued a statement urging its repeal:

“Even as America faces a crisis unrivaled in any other developed country, the Congress prohibits the CDC from conducting the very research that would help us understand the problems associated with gun violence and determine how to reduce the high rate of firearm-related deaths and injuries. An epidemiological analysis of gun violence is vital so physicians and other health providers, law enforcement, and society at large may be able to prevent injury, death and other harms to society resulting from firearms.”

Kamin, the UConn doctor, said it was time to free up the CDC to research gun violence.

The day of action was organized by congressional Democrats, but at least one Republican elected official participated: Mary Ann Jacob of the Legislative Council of Newtown, where 26 children and educators were shot to death at Sandy Hook School in December 2012.

Imam Hamid Nasir Malik, whose mosque in Meriden was fired on in the aftermath of the Paris attack, led a prayer at the end of the event. A neighbor who has pleaded guilty to the shooting has been welcomed to the mosque in a gesture of reconciliation.

A Quinnipiac University poll released June 8, before the Orlando attack, found gun control to be the top priority for only 1 percent of voters in Connecticut. But DeLauro said voters are responding to the refusal of congressional leaders to allow a vote on any gun measure.

“It is truly a groundswell around the country,” DeLauro said. “And when you’re looking at hundreds of thousands of voices that say, ‘Vote. We sent you there to vote. Let us have a vote.’ It may be that we may get that vote.”

In political endorsements announced Wednesday, gun owners backed Republican Angel Cadena over DeLauro and Republican Clay Cope over Esty. The group endorsed Republicans for U.S. Senate and in every congressional race except the 4th District, where it made no endorsement. The GOP candidate there is state Rep. John Shaban of Redding, who voted for the gun control law passed after Newtown.

“Gun owners can and must make a difference, or further erosion of our rights is sure to follow,” said Scott Wilson, the president of the CCDL.

The only Democratic incumbent endorsed was state Sen. Cathy Osten, D-Sprague, who voted against the Newtown law.

The NRA’s Political Victory Fund, meanwhile, released its first television commercial of the 2016 presidential campaign with a press release saying Democrat Hillary Clinton is no friend of gun owners or supporter of the right to own firearms. But the commercial was about the terrorist attack in Benghazi while Clinton was secretary of state.

It made no mention of gun control.