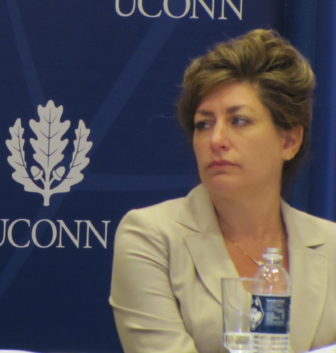 Two Senate leaders wrote UConn President Susan Herbst Wednesday to object to hefty pay increases she awarded four of her top staff and to “call for more oversight over the compensation practices at UConn.”

But the chairman of the school’s governing board vigorously defended the increases and rejected calls to rescind them.

“We also believe that we may need to end your practice of offering significant performance-based incentive bonus payments to senior employees,” Senate President Pro Tem Martin Looney and Sen. Danté Bartolomeo, the co-chair of the legislative committee that oversees higher education, wrote Herbst.

Looney, D-New Haven, and Bartolomeo, D-Meriden, are working with leaders of the state House of Representatives to organize a legislative investigation and possibly a hearing at the state Capitol complex.

The Connecticut Mirror reported last week that Herbst was sticking to promises she made in 2013 and 2014 to award multiple-year pay increases to the university’s general counsel, chief architect and Herbst’s chief of staff and deputy chief of staff.

All received pay increases in the 2015-16 fiscal year, even though few other non-union managers did – at UConn or elsewhere in state government.

The legislators’ five-page letter was sent to Herbst shortly after the UConn Board of Trustees met to adopt a largely flat $1.3 billion budget for 2015-16 and requested an additional $107 million in funding from the state the following year.

After that meeting UConn Board of Trustees Chairman Lawrence McHugh defended the pay increases to reporters and said they would not be rescinded and any previously approved increases would go forward.

“It’s not that Susan Herbst is being overpaid, Susan Herbst has done an outstanding job at the University of Connecticut,” said McHugh. “Our situation is to make sure that we keep Susan at this university and to work all we can to do that.” 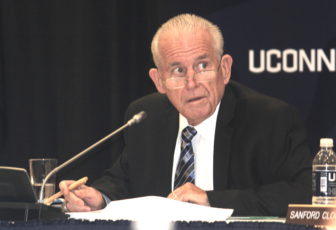 Lawrence McHugh, chair of the UConn Board of Trustees

Whether the increases for the four staff can legally be rescinded comes down to whether letters Herbst wrote in 2013 and 2014 informing them of the increases are contracts, and therefore binding.

“I believe that a contract is a contract, and people should abide by contracts,”  McHugh told reporters. “I realize the economics in the state of Connecticut , and how it is probably as much as anybody else in the state. I represent the largest chamber in the state of Connecticut. So I undertand where the business [community] is coming from. But I also understand, as I did back in 2013 and 2014, that when you have quality people, you have got to make sure that you keep quality people here, and that’s what we are trying to do.”

Looney – a Democrat from New Haven who received a law degree from UConn years ago and owns his own firm – does not believe the university is bound to the increases by the letters.

“I don’t believe so,” Looney said during an interview on the public-affairs show “Where We Live” on WNPR. “The economic assumptions in which those letters were based have changed substantially, obviously, over the last few years.”

He pointed to raises for top management positions elsewhere in state government that were promised and canceled as the economy suffered.

Herbst responded by the end of the day to the legislators informing them of the reasons the increases were necessary and promised she would not be writing any more letters to award increases to a small handful of non-union staff.

“The market for senior positions in higher education nationally is a critical factor when determining non-union pay here and at all similar institutions nationally. The university competes with other highly-ranked research universities – both public and private – for many senior state (as well as for faculty and students. That market drives pay,” Herbst wrote Looney and Bartolomeo. “Though performance-based pay and other incentives are a common tool used in both the public and private sector when it comes to compensation – including in higher education – UConn has no plans to include similar provisions in future employment agreement for non-athletic staff.”

“On a day that the University is requesting more than $100 million in new state funding, we cannot continue to allow a system where exceptionally large raises, bonuses and car allowances are handed out to some of the University’s highest-paid staff,” said Bartolomeo Wednesday. “These outrageous raises and offers of substantial discretionary bonus payments that are awarded, offered and paid during a period of state budget cuts and salary freezes now followed up by withdrawal of the negotiated agreement with [unionized employees] and also significant state layoffs – raise many questions and demand reform.”

Asked about the pushback from legislative leaders, McHugh said, “I will take that straight up.”

“This is the United States of America where everybody, everyone has a right to say what they want to say, and I might disagree with statements, but I am not going to get out and get into a back and forth with the leadership of the state of Connecticut. That’s not my job,” McHugh said. “My job is to support the University of Connecticut. My job is to support the faculty and staff and administration team here and to continue to make the University of Connecticut a top 20 university, and I am not going to shrink from that.”

McHugh also said that when the increases were promised, “The economic climate back then was a lot different than it was today.”

The letters awarding multi-year raises to Herbst’s deputy chief of staff, chief architect and top lawyer were awarded one month after the state cut UConn’s budget mid-year to close a deficit and one month after state budget officials warned of deficits topping $1 billion in each of the next three fiscal years.