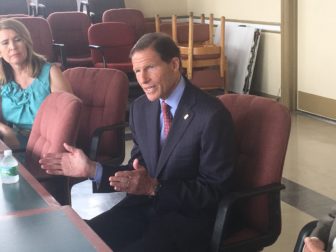 Washington – Puerto Rico announced Friday it will default on nearly $1 billion of its debt, but legislation backed by Connecticut lawmakers and signed by President Barack Obama this week puts a halt to legal battles that would stem from the island’s inability to pay for a growing share of its debt.

Blumenthal said the legislation has provided stability instead of what would have been “a race to the courts, litigation with huge costs, probably, virtually stopping new investment in the island.”

“Not to mention that the creditors would have been able to have first claim to the money in Puerto Rico right now,” Blumenthal said.

The island’s default marks the first time a state or U.S. territory has failed to pay general obligation bonds since the Great Depression.

Puerto Rico bonds aren’t taxed anywhere in the United States, so the commonwealth was able to raise money for years from mainland investors, who were assured that – unlike many cities – the government wouldn’t be able to escape from its debts in bankruptcy court.

Blumenthal introduced legislation that would have allowed Puerto Rico to declare bankruptcy, but it failed to move forward.

“I spent endless hours talking to the chairmen of relevant committees, leaders in the Senate, leaders in the House, and they had draconian conditions,” Blumenthal said. Among them was the complete elimination of minimum wage protection, he said.

The PROMESA Act gives Puerto Rico’s governor the authority to designate a time period in which employers could pay newly employed workers below the federal minimum wage – currently $7.25 an hour – if those workers are under 25 years old, but Blumenthal said Republicans were looking for a broader concession.

It also will require Puerto Rico’s government to submit financial statements and budget blueprints to a federal oversight board. 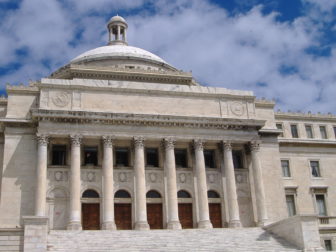 South view of the Puerto Rico Capitol in San Juan

The board would have seven members, appointed by the president from recommendations by members of the U.S. House and Senate – four appointed by the Republicans and three by the Democrats. The panel would have the authority to enforce balanced budgets and reforms if Puerto Rico’s government fails to do so. At least one of the seven members would be a resident of Puerto Rico.

Opponents of the bill, including Sen. Bernie Sanders, I-VT, called the oversight board a “junta” that would be like “a colonial master” for the island.

All members of Connecticut’s congressional delegation supported the PROMESA Act, which was approved by the Senate Wednesday and by the U.S. House of Representatives earlier this month.

But some lawmakers said they backed the bill – a bipartisan compromise – reluctantly.

Sen. Chris Murphy, D-Conn., said he was “hopeful that this bill will help Puerto Rico begin to right the ship and restore stability on the island.”

“The crisis in Puerto Rico isn’t abstract – hospitals are running out of supplies, vital human services are being severely curtailed,” Murphy said. “While this isn’t the bill I would have written, I’ve heard directly from the people of Puerto Rico and the Puerto Rican community in Connecticut about the need to pass this legislation now, in order to begin the process of financial reform.”

Puerto Rico’s financial crisis has resulted in an outmigration of island residents to the U.S. mainland. Florida has been the most popular destination, but many have also relocated to Connecticut, where more than 7 percent of the population is of Puerto Rican descent, the highest concentration of islanders per capita in the nation.