Larson, Lewis meet with Speaker Ryan, but no deal on gun bills vote 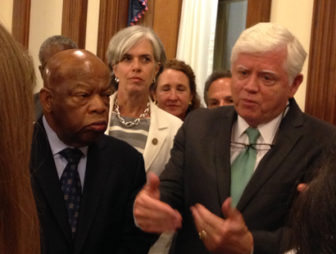 “We are not going away,” Larson said.

Larson and civil rights icon Lewis led a sit-in of representatives on the House floor last month, disrupting  House business to press for a chance to vote on a “terror gap” bill that would prohibit those on the federal government’s terrorist watch list from purchasing weapons and legislation that would expand FBI background checks of gun purchasers.

After meeting with Ryan, Larson said “there was no resolution, only that there would be more meetings.”

Ryan has not committed to allowing the legislation promoted by Democrats  to have a House vote. Instead, House GOP leaders proposed to hold a vote on a Republican alternative that would give the U.S. attorney general three days to seek a federal court order barring the sale of a firearm to someone being investigated as a known or suspected terrorist.

The measure, which would be part of an anti-terror package the House plans to consider this week, is similar to one rejected in the Senate by Democrats who say three days is not enough time to show that a person should be blocked from buying a gun.

Lewis said Ryan asked him how the Democratic rebellion over gun control, sparked by the massacre in an Orlando nightclub, got started. Ryan had derided a sit-in by  Democrats on the House floor last month as a “publicity stunt.”

“It grew out of concern in the Democratic caucus about gun violence,” Lewis said he told Ryan of the protests. “There’s been too much violence, too many killings and we want action now.”

“While they have different views on how to achieve a shared goal of preventing gun deaths in America — particularly on matters of due process — the speaker was glad they were able to have the discussion,” Strong said. “ The path ahead on the anti-terrorism package will be discussed and determined by the majority in the coming days.”

The Democrats said the meeting was cordial. But earlier in the day, Majority Leader Kevin McCarthy and other GOP leaders said they would not let Democrats commandeer the floor again. McCarthy also said he and Ryan planned to meet with the House sergeant-at-arms to seek details of reports of misconduct or other events during the protests two weeks ago on the House floor.

After emerging from their meeting with Ryan,  Larson and Lewis met with a group of Democrats in House Minority Leader Nancy Pelosi’s office in the U.S. Capitol. Reps. Elizabeth Esty, D-5th District, and Rosa DeLauro, D-3rd District, were among those who attended what was considered a strategy session on the tactics House Democrats would use this week to continue their campaign.

They were coy about their plans, but Lewis vowed “there will be action.”

Larson said Ryan expressed concern about “the institution of Congress.”

“We shared with him what’s going on outside the walls of the U.S. Capitol,” Larson said, referring to public concerns about the level of gun violence in the nation.

Democrats said they are determined to continue to press for votes on the gun measures —although this time tactics may not include civil disobedience. But House leaders hope to begin the summer recess, which will last until September, next week.

Esty, who took to the House floor five times Tuesday to talk about the need to tighten gun laws, said there’s still a chance to accomplish the Democrats’ goals.

“We have plenty of time to make noise,” she said.