Jepsen concerned about Anthem-Cigna deal, may move to block it 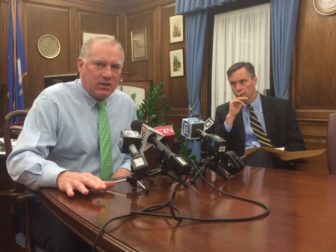 Washington – Connecticut Attorney General George Jepsen said he is concerned an Anthem-Cigna merger would result in decreased competition and higher premiums and will make a decision in as soon as two weeks whether to try to block it in court.

“Our state’s health insurance market is already concentrated,” Jepsen said in a statement. “Further concentration could lead to an unacceptable accumulation of market power, which arguably could lead to higher prices and negative effects on quality of care through reduced products, service and innovation.”

The mergers would shrink the nation’s five biggest health insurers to three. In an interview, Jepsen said he’s concerned on the impact the consolidation would have in Connecticut and on Connecticut state employees who have retired and live outside the state.

Jepsen said two senior attorneys from his office have been investigating the antitrust impact of the proposed $54 billion merger for nearly a year. He said his office also is reviewing another giant health care merger, between Aetna and Humana, but he said that deal raised fewer concerns because “Humana has a very small footprint” in Connecticut.

But Jepsen said Cigna and Aetna have a large share of the big group health insurance plans in the state.

Jepsen said he would make a decision as early as two weeks from now on whether to go to court to try to block the merger in Connecticut. To do so, Jepsen would have to determine the merger would violate Connecticut’s antitrust laws.

“Although sometimes merging parties can divest certain businesses to lessen the impact of the merger, I’m not sure if that would be viable in this case given the limited number of suitable alternative competitors,” Jepsen said.

“While my antitrust investigation is not yet complete, and I have made no final decision on whether to challenge this merger in court, I am concerned that it could provide no discernible benefit to consumers while significantly altering the landscape for the provision of healthcare in the future,” he said. “My decision will be guided by the evidence and the law, and Connecticut residents should rest assured that ensuring a competitive healthcare market is among my highest priorities.”

Anthem and the Connecticut Insurance Department declined to comment on Jepsen’s statements.

Last month, Sen. Richard Blumenthal, D-Conn., and six other Democrats on the Senate Judiciary Committee asked the Justice Department to block both mergers because they say there would be too much harmful consolidation in the market.

Others, including Connecticut Comptroller Kevin Lembo and several members of the state legislature, have urged Connecticut Insurance Commissioner Katharine Wade to recuse herself from reviewing the Anthem-Cigna deal.

Wade, leading 28 states that must review the merger, is a former Cigna lobbyist whose husband works there. At one point, Jepsen was concerned he had a conflict of interest in reviewing the Anthem-Cigna merger because his wife worked for Cigna. Jepsen recused himself from the review.

But Jepsen’s wife left Cigna last year, allowing him to take an active role in the investigation of the merger.