Delegates Derek Phelps of Killingworth and Susan Hatfield of Pomfret. Hatfield is a prosecutor.

Cleveland — Donald J. Trump’s nightmarish vision of an America unable to fight Islamic terrorists, control its border with Mexico or quell simple street crime came alive Monday night in the voices of soldiers, politicians, police and the families of people killed at home and abroad, victims of what Republicans say are the policies of Barack Obama and Hillary Clinton.

An angry and tearful Pat Smith, the mother of an American killed in the terrorist attack on the U.S. diplomatic compound in Benghazi, told GOP delegates that Clinton’s failures as secretary of state killed her son, a raw moment on the opening night of the Republican National Convention.

Members of the security detail that responded to Benghazi complained of U.S. leadership unprepared for the attack and too slow to react.

David A. Clarke Jr., the square-jawed African-American sheriff of Milwaukee, simultaneously invited praise for police reeling from the fatal ambushes of police officers in Dallas and Baton Rouge and scorn of Black Lives Matter by saying, “I want to make something perfectly clear — blue lives matter.”

It was an exhausting night of anger and toughness. By the time U.S. Sen. Joni Ernst of Iowa took the stage after 11 p.m., the delegates were headed for the exits, sated by a long night of pounding on Clinton and Obama, lightened briefly by the surprise appearance of their presumptive nominee. 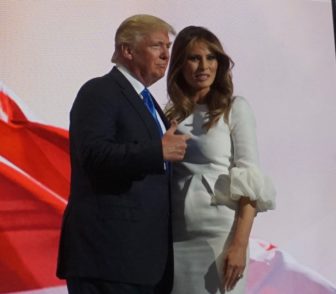 Donald and Melania Trump after she addressed the convention.

Trump, a candidate who has scorned convention throughout the campaign, did what nominees never do by appearing on opening night. He walked on stage to applause to introduce his wife, Melania, a former model from Slovenia who would be the first foreign-born first lady since Louisa Adams.

Photographers clogged the aisles, crowding the delegations seated by the stage: New York, New Jersey and Connecticut. They waited for the moment certain to come: Trump returning to the stage to embrace his wife and give a thumbs up to the delegates.

If that was the photo op, the talking point was an imperiled America.

Marcus Luttrell, a decorated former Navy SEAL whose fight against the Taliban in Afghanistan was depicted in the memoir and movie “Lone Survivor,” described an America in imminent danger from Islamic extremists. He said he was proud to have done his part, but wondered about the delegates.

“Who among you is going to step up and take the fight to the enemy, because it’s here?” Luttrell said.

Sabine Durden told the delegates about her son, Dominic, 30, a dispatcher for the Sheriff’s Department in Riverside County, Calif., who was killed after being struck by a driver Durden described as “an illegal alien” with a criminal record that included drunk driving. It is a message she has delivered at Trump rallies.

U.S. Rep. Michael McCaul of Texas, the chairman of the House Committee on Homeland Security, called for an end to sanctuary cities, where local police generally are directed not to pursue undocumented immigrants unless they commit crimes beyond immigration offenses. In Connecticut, New Haven and Hartford are considered sanctuary cities. 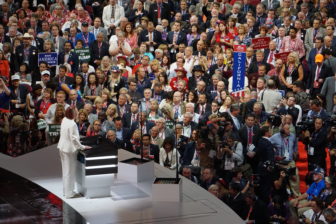 Pat Smith tells the delegates she holds Hillary Clinton responsible for the death of her son in Benghazi.

Rudy Giuliani, the former New York City mayor who failed as a presidential candidate, took the stage to applause, smiled and said it was about time for the GOP to nominate a New Yorker for president. But Giuliani, a former prosecutor who became mayor when crime was a major issue in New York, quickly turned serious.

Crime is at a 40-year low in America, and Giuliani briefly undercut his own argument by bragging about how New York has gone from the crime capital of America to the safest city in the U.S. But statistics do not resonate this week, not so soon after the ambush deaths of three police officers in Baton Rouge, La.

More than invoking crime and the fears it brings, Giuliani attacked identity politics, a subtle rebuke to the Black Lives Matter movement, even if he also reminded delegates of the need to speak out against unjustified police shootings. 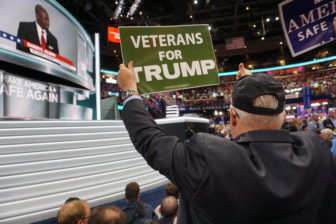 Charles Bruckerhoff of Chaplin, a Vietnam vet, waves a sign.

“I think in a lot of ways it’s getting Republicans to pay attention, that this is more serious than some people think it is,” said state Sen. Michael McLachlan of Danbury, one of seven legislators in the delegation. “I mean, to hear Marcus Luttrell, to hear the Benghazi soldiers, to hear the parents of people killed by illegal aliens on the border — wake up America, this is a problem.”

“It’s very positive. It’s very serious. It’s hard. But it’s true,” said Charles Bruckerhoff, a delegate from Chaplin. “It is the truth, what we have in America today. It’s frightening, and we have got to turn this around.”

Linda McMahon of Greenwich, the U.S. Senate nominee in 2010 and 2012, said the tone and message were appropriate.

“A lot of people in Middle America are really anxious. They really want to be safe again. All these terrorist attacks we’ve had have really, I think, unnerved so many Americans, and they are afraid. And I think they are looking for leaders with a history of strength, someone who is not afraid to say what he is going to do,” McMahon said. “I like that attitude.”

Steve Bonafonte, a delegate from Hartford attending his first convention, was more measured.