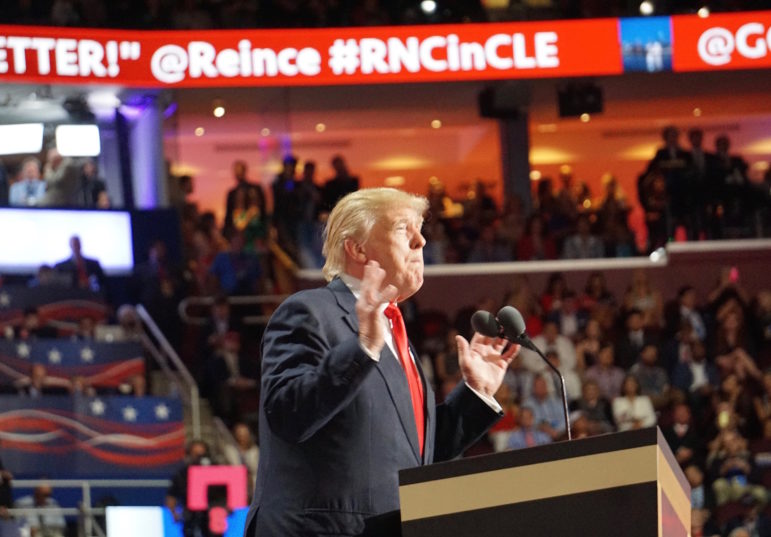 Donald J. Trump said he “humbly and gratefully” accepts the GOP nomination for president. He promised, “I will be your voice.”

In a polished speech read from a teleprompter, Trump reinforced the opening night message of the four-day Republican National Convention and themes of his 13 months as a candidate, describing an America imperiled and in decline, threatened by enemies foreign and domestic.

“Our convention occurs at a moment of crisis for our nation. The attacks on our police, and the terrorism in our cities threaten our very way of life. Any politician who does not grasp this danger is not fit to lead our country,” Trump said.

Delegates expressed measures of approval and relief that Trump, who largely hewed to a prepared text, was capable of raising the tone of  his rhetoric. He stepped back when the crowd responded to a Hillary Clinton reference with cries of “Lock her up!” Instead, he told them Republicans would defeat her.

“I think he took more of a statesman-like tone,” said Themis Klarides of Derby, the Connecticut House Republican leader. “He still is who he is, and he shouldn’t change that, because that’s what makes him real. But when people were yelling lock her up, he said, ‘Let’s defeat her.’ That was good.”

Rosa C. Rebimbas of Naugatuck, the ranking House Republican on the General Assembly’s Judiciary Committee, said before the speech she was hoping to hear details about his approach to crime. They didn’t come, but Rebimbas still praised the performance.

But the Connecticut delegation, seated at the front of the Quicken Loans Arena, for the most part offered a restrained reaction to some of Trump’s tougher applause lines. Barely anyone moved when Trump boasted of his endorsement by the NRA. 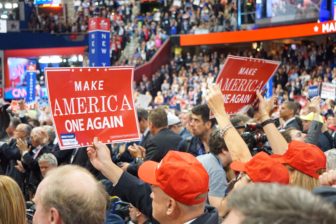 Delegates react to their nominee.

His view of crime in America probably matched the mood of voters horrified by the recent ambushes of police in Dallas and Baton Rouge. FBI statistics show a long steady drop in crime in the U.S since the early 1970s, but Trump can point to a one-year uptick in urban crime.

“I have a message for all of you: The crime and violence that today afflicts our nation will soon – and I mean very soon – will come to an end,” Trump said. “Beginning on January 20th of 2017, safety will be restored. The most basic duty of government is to defend the lives of its own citizens. Any government that fails to do so is a government unworthy to lead.”

How this will occur was not explained. Trump said nothing about new laws or new approaches to crime, other than a pledge to end the “catch-and-release” of immigrants illegally crossing the border.

He gave no sign of whether he would break with a growing consensus on the political left and right, by Democrats such as Connecticut Gov. Dannel P. Malloy and Republicans such as former Texas Gov. Rick Perry, that the get-tough on crime approach of the 80s and 90s that gave the U.S. the highest incarceration rates in the world was a mistake.

Trump didn’t say if he would ask Congress to remove discretion in sentencing by returning federal judges to rigid sentencing prescriptions pushed by Ronald Reagan and Bill Clinton or favor a restoration of mandatory minimum sentences that landed heavily on urban consumers of crack, less so on the wealthier and whiter users of powder cocaine.

Instead, he promised to convene the best and the brightest to study new approaches to law enforcement, suggesting that solutions would come quickly. 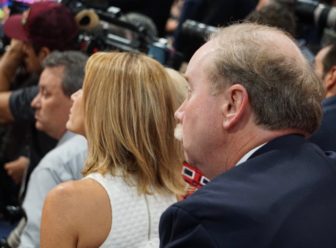 From left, Anthony D’Amelio, Themis Klarides and Michael McLachlan listening to Trump. All are delegates and legislators.

Similarly, he repeatedly suggested quick resolutions to illegal immigration, the rise of ISIS in the Middle East, the loss of jobs overseas, the trade deficit and the national debt.

How, he never said.

Trump said he would suspend immigration form any nation that cannot guarantee its emigres are free of terrorists. He did not identify any country he would blacklist.

His audience didn’t seem to care, frequently interrupting with applause,

Trump spoke for more than an hour, one of the longer acceptance speeches in decades. He paused frequently, drinking in the applause. He joined in a chant of “USA! USA!”

At the same time, Trump promised to speak plainly and honestly.

“So if you want to hear the corporate spin, the carefully crafted lies, and the media myths the Democrats are holding their convention next week. But here, at our convention, there will be no lies,” he said. “We will honor the American people with the truth, and nothing else.”

He promised to find a kindred spirit of Antonin Scalia to fill the U.S. Supreme Court vacancy left by the death of the court’s leading conservative voice.

“This will be one of the most important issues decided by this election,” Trump said, an assertion with which Democrats would agree. “My opponent wants to essentially abolish the Second Amendment. I, on the other hand, received the early and strong endorsement of the National Rifle Association and will protect the right of all Americans to keep their families safe.”

“The damage and devastation that can be inflicted by Islamic radicals has been seen over and over – at the World Trade Center, at an office party in San Bernardino, at the Boston Marathon, at a military recruiting center in Chattanooga, Tenn., and many, many other locations,” he said. “Only weeks ago, in Orlando, Fla., 49 wonderful Americans were savagely murdered by an Islamic terrorist. This time, the terrorist targeted LGBTQ community. No good, we’re going to stop it.”

“As your resident, I will do everything in my power to protect our LGBTQ citizens from the violence and oppression of a hateful foreign ideology,” Trump said. It was a gesture to the gay community, but only in the context of getting tough on terror.

Gay activists have said they also desire relief from discrimination in Indiana, the home of his running mate, Gov. Mike Pence. And they object to a GOP platform that sets a goal of rolling back the legalization of same-sex marriage.

Trump said nothing about those issues, but he suggested the applause for his vow to protect gays from terrorism was an expression of tolerance.

“I have to say as a Republican, it is so nice to hear you cheering what I just said,” Trump said. “Thank you.” 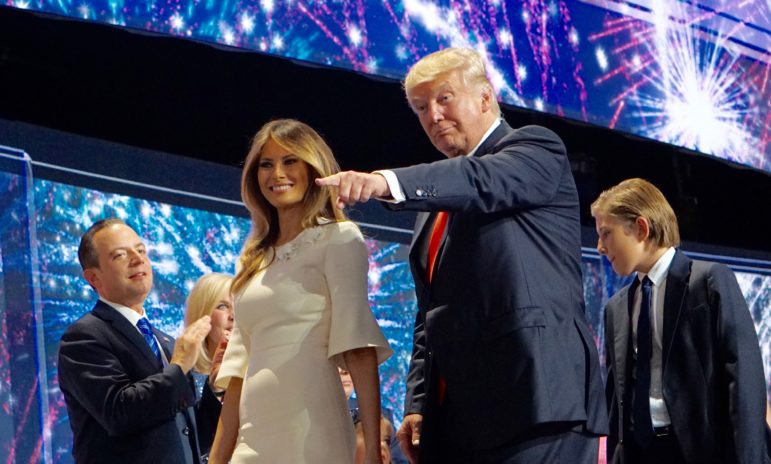 Donald J. Trump exits the stage with his wife, Melania, trailed by their son. At left is RNC chairman Reince Priebus.