Democrats cheer Bernie, then nominate Hillary in a historic vote 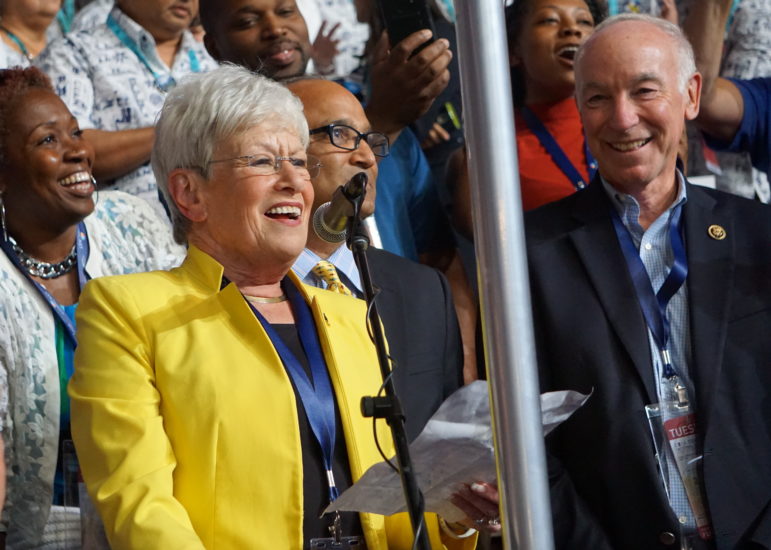 Her rival, Vermont Sen. Bernie Sanders, rose at the close of the roll call from his state’s delegation and dramatically asked that the Democratic National Convention make Clinton its nominee, another of his gestures aimed at neutralizing lingering opposition. 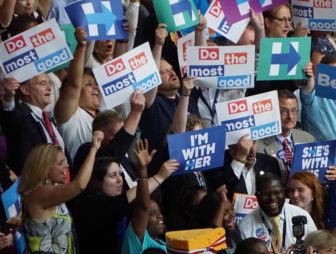 A celebration on the convention floor after the roll call.

The Wells Fargo Center rocked with cheers and applause in  celebration and relief. But hundreds of Sanders delegates left the hall to protest on the concourse between Wells Fargo and the media center, demonstrating unhappiness with the party and press.

“The revolution continues. We have work to do,” said Kate Larson of Dubuque, Iowa as she stood pressing a Sanders sign against a plate glass window overlooking a media work area. “A lot of people are ready to leave.” 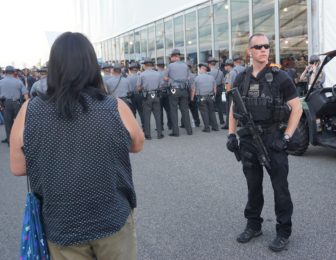 Sanders delegates protest outside the DNC as police watch.

Rows of Pennsylvania State Troopers stood at attention about 20 yards away, staring. A federal agent behind them was armed with an assault weapon. Buses serving the Connecticut delegation’s hotel were re-routed after the session to avoid protesters outside the security perimeter.

Clinton was nominated by an icon of the women’s movement, Sen. Barbara Mikulski of Maryland, and a hero of the struggle for civil rights, Rep. John Lewis of Georgia, an effort to stamp the night with a sense of history.

Sanders enjoyed his last moments in the spotlight, smiling and waving to the exuberant crowd from the audience as his name was placed in nomination with vows to continue “a political revolution” and calls to unite behind the victor. 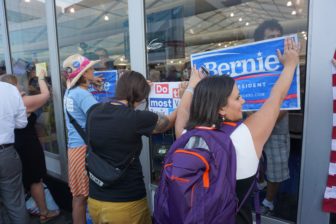 Kate Larson, a Sanders delegate from Iowa, protesting the media,

“I urge you to stay active, stay engaged and stay fired up,” said Paul Feeney of Boston, the legislative director the International Brotherhood of Electrical Workers and the director of Sanders’ campaign in Connecticut.

It was designed to give Sanders a final turn at a microphone to effectively declare Clinton the nominee.

When Connecticut’s turn came, state Chairman Nick Balletto informed the hall they were about to hear the votes of the state that originated the hamburger and perfected the pizza. He then yielded to Lt. Gov. Nancy Wyman, who touted the state’s passage of the $10.10 minimum wage and successful implementation of Obamacare.

She cast 44 votes for Clinton, who was backed by the political establishment, and 27 votes for Sanders, who filled the New Haven Green on the eve of a Connecticut primary narrowly won by Clinton.

“This has been such an honor. I think Dan gave me an opportunity of a lifetime, really,” Wyman said. Gov. Dannel P. Malloy, who addressed the convention Monday, had been scheduled to perform the task.

Bill Clinton addressed the convention later Tuesday night with a goal of turning Democrats away from the long, contentious primary season toward the challenges ahead in electing his wife over Republican Donald J. Trump.

President Obama will speak Wednesday night, making the case for the woman he defeated in 2008, only to choose her as his secretary of state.

Connecticut has a long relationship with the Clintons: The former president and would-be president met in New Haven while attending Yale Law School with Sen. Richard Blumenthal, who stood near Wyman on Tuesday. U.S. Reps. John Larson, Joe Courtney, Rosa DeLauro and Elizabeth Esty shared a row during the vote.

Perhaps more significantly, it was the Clintons who started Connecticut Democrats on their presidential winning streak. The last Republican to carry the state was George H.W. Bush, a son of Greenwich, in 1988.

Trump won the Connecticut Republican primary in a landslide, taking 165 of 169 cities and towns. He left the Republican National Convention in Cleveland last week with his campaign chairman, New Britain native Paul Manafort, insisting the long-blue state is in play this year.