Kaine a hard sell to some CT delegates 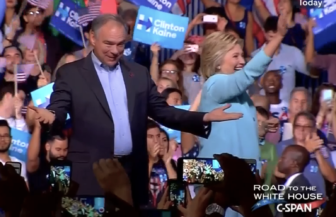 Virginia Sen. Tim Caine on stage with Hillary Clinton for the announcement of his selection as her vice presidential running mate.

Philadelphia –  Hillary Clinton’s pick for vice president, Virginia Sen. Tim Kaine will be officially introduced to the nation Wednesday evening, but he isn’t the first choice of some Connecticut delegates, a few of whom still have reservations.

To many supporters of Sen. Bernie Sanders at the Democratic National Convention, including some from Connecticut, Kaine is a hard sell  because they would have preferred someone with stronger progressive credentials or a minority candidate to share the ticket with Clinton.

“I was really hoping it would be [Housing Secretary] Julian Castro,” said Eloisa Melendez, a city councilwoman from Norwalk and a Sanders delegate.

Mercedes Alonzo, a Sanders delegate, said if Clinton had chosen Castro, she would have “hit the ball out of the park.”

A Mexican-American from Texas, Castro was on a short list of possible vice presidential candidates that included Massachusetts Sen. Elizabeth Warren – a favorite among many progressives – Sen. Cory Booker of New Jersey and Labor Secretary Thomas Perez.

Clinton said she was “afflicted with the responsibility gene,” and decided against less experienced vice-presidential candidates.

Melendez said she had hoped Clinton would be bolder.

“This election is so important for Latinos and for Latino voters,” she said.

More than at any time in U.S. political history, it seemed that 2016 would be the year that a major political party could have a Hispanic candidate on its ticket. Republican nominee Donald Trump’s controversial rhetoric on immigration helped focus attention on the Latino vote in this campaign season.

Latinos like Melendez are unenthusiastic about Kaine, despite his  fluency in Spanish, burnished during a year he spent in Honduras working with Jesuit missionaries. But not all are displeased with Clinton’s pick .

“I’m 100 percent behind the choice [of Kaine],” said Frank Alverado, a Clinton delegate from Connecticut. “He knows government inside and out.”

Meanwhile, Luis Magana, a Latino delegate from Connecticut who supports Sanders, said he was hoping for a more progressive candidate – Elizabeth Warren.

“At the end of the day, it doesn’t matter what your race or gender is, what matters is ideology,” Magana said.

Bernie delegate Audrey Blondin also said Warren was her first choice. “I would have preferred a progressive,” she said.

Some Sanders delegates are considering a protest during Kaine’s speech Wednesday night, said California delegate Norman Solomon, who surveyed more than 300 supporters of the Vermont senator.

But Blumenthal said opposition to Kaine’s candidacy among fellow progressives will dissipate.

“At heart he is deeply progressive when it comes to the economy,” Blumenthal said. “He has been my first choice all along.”

Blumenthal said he has worked with Kaine on military issues – Virginia is home to Newport News Shipbuilding, and, like Connecticut, its economy is dependent on federal defense dollars. Blumenthal also said he and Kaine are the only two senators with special markings on their congressional lapel pins that mark them as having children deployed in active service in the military.

“When we disagree, I know it comes from the heart,” he said.

Yet other progressive Democrats are concerned about Kaine’s positions on abortion and trade.

When he ran for governor 11 years ago, Kaine said he had “faith-based opposition” to abortion.

But as a U.S. senator, Kaine has voted to defend access to abortion.

Kaine also riled progressives by voting to give President Obama “fast-track authority” to negotiate a trade deal between the United States and 11 other Pacific Rim nations.

That authority prevents Congress from altering the Trans-Pacific Partnership and restricts lawmakers to an up-or-down vote on the trade pact.

As Secretary of State, Clinton helped negotiate the TPP, but now she and Kaine say they oppose the trade pact because it does not meet certain standards on wages and national security.